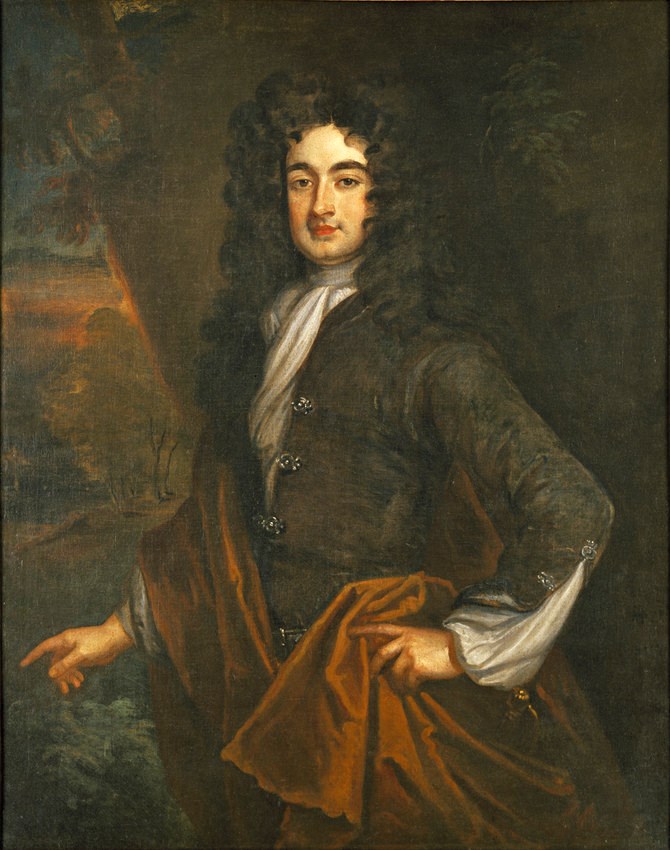 Tea in The Diary of William Byrd
William Byrd II  (1674-1744) was born in Henrico County, Colony of Virginia. His father, Colonel William Byrd I, had come from England to settle in Virginia. When he was seven years old, his father sent him to London for schooling. He was educated at Felsted School in Essex, England, for the law. While there, Byrd became engrained in London's society & politics. Not only did he study law, but in 1696, at age 22, he was also elected by friends in the aristocracy as a Fellow in the Royal Society. He also served as a representative of Virginia in London. He was a member of the King's Counsel for 37 years.
Byrd returned to Richmond upon the death of his father in 1705. He had a very large inheritance, & was now required to run the estate. He returned to the Colony following his schooling & lived in lordly estate on Westover Plantation.
Soon after a Portuguese priest encountered tea in China in 1565, the Dutch, then linked with Portugal, became aware of it. The Dutch West Indies Company began to bring it to Europe from China. It has been mentioned in France since at least 1636. But by the end of the 18C, it was favored most by the Dutch & the English, who began exporting it to their American colonies about 1717.
Historian Barbara Carson tells us that In the early 18C, the uses of tea in the American colonies were largely medicinal & ceremonial. The so-called secret diary kept in shorthand code by William Byrd allows us to look at the early use of hot beverages by one of Virginia’s wealthiest men. For nearly four years, from February 1709 to September 1712, Byrd made entries in his diary almost every day. The entries are repetitive in their mention of his personal habits, & it is therefore likely that the diary offers a somewhat accurate record of his use of hot beverages, Byrd recorded only a few details relative to his drinking behavior & did not identify the household items relating to it.
Fewer than 10 percent of his daily entries mention tea, chocolate, or coffee drinking, with tea being noted most frequently. For this very wealthy, early Virginia gentleman, who clearly could have afforded to make a habit of tea drinking, it does not appear to have been a daily ritual. The few mentions of tea in the diary are, however, revealing.
Tea was often associated at this time with the treatment of illness or with formal ceremonies of official greeting & not as refreshment offered to guests after dinner or in the evening. Nor was it a breakfast beverage, Byrd’s usual breakfast consisted of milk, served boiled rather than cold. On the infrequent mornings when he drank tea, which he often referred to as “milk tea,” taken with bread & butter, he some-times mentioned being sick. He seems to have suffered from malaria for which he also drank sage tea & a bark infusion.
Although he hosted many overnight guests at Westover, his plantation on the James River, he rarely mentions tea offered for breakfast on these occasions. The major exception is the visit of Governor Spotswood in June of 1710. Byrd offered tea to the governor on three mornings & chocolate on the fourth.
When in Williamsburg on business, Byrd met with the governor & other officials in the morning. Tea, or occasion-ally chocolate, was served at these times. It seems to have been presented as a kind of salute, a formal recognition of status or membership at the beginning of their discussions.
Unlike tea, Byrd does seem to have thought of chocolate as a breakfast beverage. He mentions it about two-thirds as often as he does tea. He records that he drank chocolate with the women who were attending his wife when she gave birth to a son in June 1709, otherwise his references are not connected with specific occasions. He mentions drinking coffee only four times: with the governor (July 5 & 6, 1710), with women (March 1711), & at home with visitors (April 9, 1711).
He notes visits to Williamsburg’s coffeehouses, however, on more than 60  days. Although he played cards, gambled, & frequently lost money in these establishments, he may not have been drinking coffee. On October 29, 1710, he wrote, “Walked to the coffeehouse where I drank two dishes of tea.”
At the time when Byrd was writing, tea was about to begin its slow climb to dominance among hot beverages. Although merchants had sporadically imported tea from China to England & then to the American Colonies in the late seventeenth century, the East India Company only secured partial access to the Port of Canton in 1713. Direct & regular shipments of tea from China began in 1717...
See: "Determining The Growth And Distribution Of Tea Drinking In 18C America" by Barbara G. Carson (1941-2011)
For much more about Byrd's interaction wit women. see
Louis B. Wright and Marion Tinlin (eds.), The Secret Diary of William Byrd of Westover, 1709-1712 (Richmond, Va.: Dietz Press, 1941)
Posted by Barbara Wells Sarudy at 4:00 AM