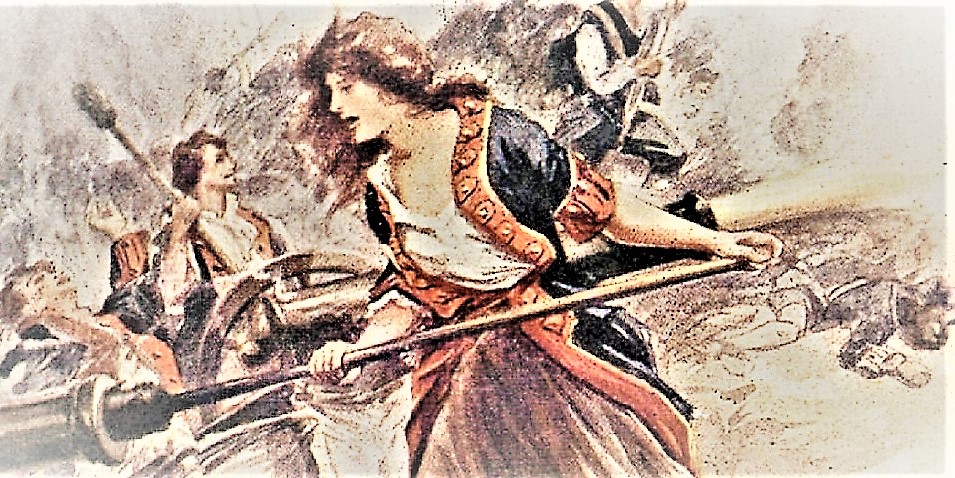 Margaret Cochran Corbin (1751-1800) fought in the American Revolutionary War. On November 16, 1776, her husband, John Corbin, was one of some 600 American soldiers defending Fort Washington in northern Manhattan from 4,000 attacking Hessian troops under British command. Margaret, too worried to let her husband go into battle alone, decided to go with him. Since she was a nurse, she was allowed to accompany her husband as a nurse for the injured soldiers. John Corbin was on the crew one of 2 cannons the defenders deployed; when he fell in action, Margaret Corbin took his place &  continued to work the cannon, until she too was seriously wounded. Corbin reportedly was standing next to her husband, when he fell during battle. Immediately, she took his post, & because she had watched her husband, a trained artilleryman, fire the cannon so much, she was able to fire, clean & aim the cannon. This impressed the other soldiers & was the beginning of her military career. She later became the first woman in U.S. history to receive a pension from Congress for military service, because she could no longer work due to injury & was listed in the Corps of Invalids.

Margaret Cochran was born in Western Pennsylvania on November 12, 1751 in what is now Franklin County. Her parents were Robert Cochran, a Scots-Irish immigrant, &  his wife, Sarah. In 1756, when Margaret was 5 years old, her parents were attacked by Native Americans. Her father was killed, &  her mother was kidnapped, never to be seen again — Margaret &  her brother, John, escaped the raid because they were not at home. Margaret lived with an uncle for the rest of her childhood.

In 1772, at the age of 21, Margaret married a Virginia farmer named John Corbin. When the war began, John enlisted in the First Company of Pennsylvania Artillery as an artilleryman, one of the members of a cannon crew. As was common at the time for wives of soldiers, Margaret became a camp follower, accompanying John during his enlistment. She joined many other wives in cooking, washing, &  caring for the wounded soldiers. (She acquired the nickname "Molly Pitcher" (as did many other women who served in the war) by bringing water during fighting, both for thirsty soldiers &  to cool overheated cannons.)

On November 16, 1776, Fort Washington, where John's company was part of the garrison left behind when General George Washington retreated with the Continental Army to White Plains, New York, was attacked by the British. John Corbin was in charge of firing a small cannon at the top of a ridge, today known as Fort Tryon Park. During an assault by the Hessians, John was killed, leaving his cannon unmanned. Margaret had been with her husband on the battlefield the entire time, &  after witnessing his death, she took his place at the cannon, continuing to fire until her arm, chest, & jaw were hit by enemy fire. The British ultimately won the Battle of Fort Washington, resulting in the surrender of Margaret & her comrades & the taking of the last American position in New York City. As the equivalent of a wounded soldier, Margaret was released by the British on parole.

After the battle, Margaret went to Philadelphia, completely disabled from her wound, & never fully healed. Life was difficult for her because of her injury, &  in 1779 she received aid from the government. On June 29, the Executive Council of Pennsylvania granted her $30 to cover her present needs, &  passed her case on to Congress’s Board of War. On July 6, 1779, the Board, sympathetic to Margaret’s injuries &  impressed with her service &  bravery, granted her half the monthly pay of a soldier in the Continental Army &  a new set of clothes or its equivalent in cash. With this act, Congress made Margaret one of the first women in the United States to receive a military pension from Congress.  Corbin received financial support from the government after the war. She died in Highland Falls, New York, on January 16, 1800, at the age of 48.
Posted by Barbara Wells Sarudy at 4:00 AM