Moravian Women during the 18C Century

Moravian Women during the 18C Century
by Beverly Prior Smaby 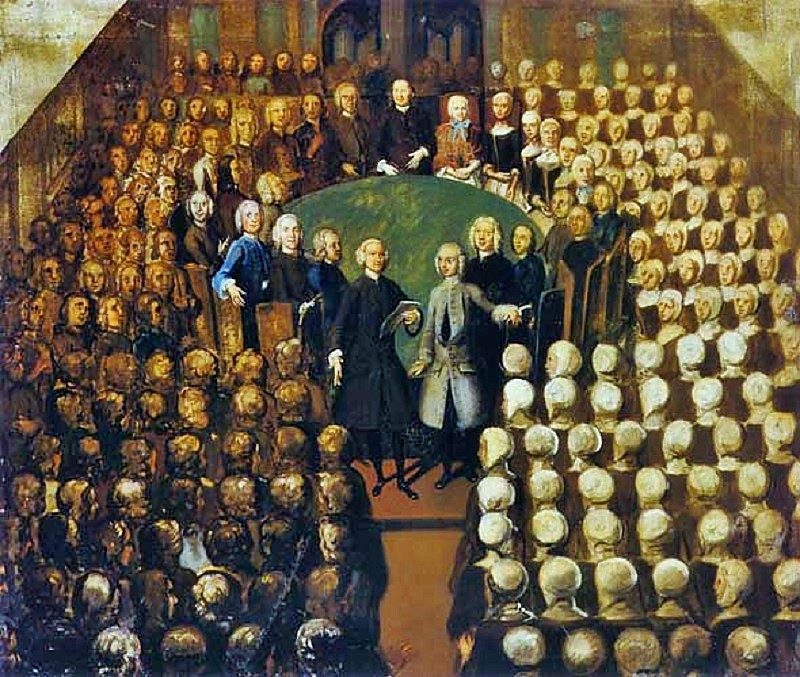 "A remarkable painting by Johann Valentin Haidt tells us a great deal about the roles of Moravian women during Zinzendorf's time. It depicts a session of the Moravian synod held at Herrnhut in 1750. In the center of the painting, men & women members of synod are gathered around a table, all major leaders in the Moravian Church, including the women. Countess Erdmuthe Dorothea von Zinzendorf, Zinzendorf's first wife, is shown at the table, for instance. After 1732 she shouldered the administration of Zinzendorf's financial affairs, which at that time were closely tied to the finances for the Moravian Church. Anna Nitschmann is shown on the left of the Countess. In 1730 she became the Chief Eldress for all women in the Church, & in 1746 she was named Mother of the entire Moravian Church. Anna Johanna Pietsch, to the left of Anna Nietschmann, became the General Eldress for all Single Sisters in 1747. Since eighteenth century European women did not generally hold positions of religious leadership, women leaders come as a surprise, but they were just one part of a well developed system of female leadership among Moravians. Women were members of councils at every level of Moravian society around the world, & in these governing bodies they participated actively in discussions & decisions. Women were also active spiritual leaders: they served as acolytes; they were ordained as deaconesses, eldresses, & for a brief moment, even as presbyters (ministers); as deaconesses & eldresses, they led worship & preached in services for their own choirs; a few Moravian woman ordained deaconesses & female presbyters, a function usually reserved for bishops, although women never officially assumed that office.

"It was Zinzendorf who made possible the culture in which women became so unusually prominent, but it is important to place his role in perspective. His views about society were in many ways typical of the eighteenth century. For Zinzendorf, human beings were not equal to each other except before the Savior, & the Moravian world he created made extensive use of hierarchy. The painting by Haidt makes this clear. Zinzendorf & the three people on either side of him sat in chairs with higher, wider backs than others at the table. Zinzendorf's was widest of all. And even though women were included at the table, it is clear that men maintained their dominance over women. Of the twenty-four people at the center table, only six were women, & Zinzendorf sat at the head of the table, his wife at his left - a symbol of his leading role in the Church & her position, important but subordinate to his. However, Zinzendorf went far enough in encouraging untraditional roles for women to cause substantial discomfort inside the Moravian Church & bitter criticism outside of it.

"Leadership roles for women did not result from a concern for gender equality. Rather, they were a byproduct of the separation of the sexes in Moravian settlements. In Zinzendorf's view, males & females of various ages had different religious needs. Beginning in the 1730s, Moravians formed "choirs" which divided their members into groups for Little Boys, Little Girls, Older Boys, Older Girls, Single Brothers, Single Sisters, Married Brothers, Married Sisters, Widowers, & Widows. Worship services for each of the choirs emphasized aspects of the Savior's life which best spoke to that choir. Children, for instance, learned about Jesus as a child. Single Brothers focused on Jesus as a single man. The Sisters' & Older Girls' Choirs emphasized Jesus as spiritual husband & Virgin Mary as the medium through which Christ became human. Experience showed that choir members were very effective at encouraging spiritual growth in each other, as Anna Nitschmann did in her 1730 covenant with Single Sisters in Herrnhut. It followed that leadership should also come from within each choir, even if their members were women.

"Another reason for female leadership was the intimacy required between ministers & believers for spiritual growth. To prevent any improper relationships from developing, Zinzendorf arranged that men should serve as spiritual leaders for men's choirs & women for women's. In mission settlements like Bethlehem, members of each choir lived & worked together in separate quarters, an organization that required some choir leaders to carry secular responsibility as well. These men & women served not only as spiritual & secular leaders within their own choirs, they also represented their choirs on local governing councils. The fact that children were raised in communal choir houses in these settlements meant that even Married Sisters had time to fill leadership roles.

"Although it was Zinzendorf who created the environment that supported female leadership, women in the Church embraced it enthusiastically. Women respected & loved their leaders, & the leaders themselves frequently showed how much they valued their opportunity to carry major responsibilities. Leaders of Single Sisters, for instance, were often reluctant to marry & give up their roles, & prominent Widows mourned not only the passing of their husbands, but the loss of leadership positions they had held with their husbands. Without Zinzendorf's support, women could not have held these positions, but neither could Zinzendorf have successfully implemented leadership by women without their enthusiastic participation.

"Beyond the offices they held, women served Moravian communities as models of how to be good Christians. Zinzendorf thought women were less likely than men to be "dry" or spiritually barren & more likely to feel joy & love in their relation to the Savior. In addition, the subordination required of women in society made it easier for them to be properly submissive to the Savior. By observing women, men could learn how to be submissive believers, too.

"Not all of Zinzendorf's opinions about women were positive. He was clearly ambivalent about the nature of women. Taking examples from the Old Testament & from his own experience, he found that women were likely to have the original sin of deceptiveness. Men, he thought, also had an original sin, namely lust, but men's was in his view less harmful than women's. Lust was so obviously sinful that it would encourage men to seek the help of the Savior, whereas women's deceptiveness might deceive even themselves into thinking they were good.

"Zinzendorf also thought that women were less likely than men to have the ability to govern well. However, this implied that some women could govern effectively, a radical thought for most Europeans in the eighteenth century. Zinzendorf was surrounded by women who amply demonstrated their administrative talent: Henriette Catharine von Gersdorf (his grandmother), Erdmuthe Dorothea von Zinzendorf (his first wife), and Anna Nitschmann (who worked closely with him as a church leader & became his second wife), to name just a few.

"Even though Zinzendorf's advocacy of women's leadership roles was based soley on religious necessity, it was apparently threatening to others. Outside the Moravian Church, critics published angry polemics against him. Inside the Church, his policies must also have been perceived as problematic. While Zinzendorf lived, there was little written evidence of criticism by Moravians, but with surprising speed after his death in 1760, the new Moravian leaders dismantled the leadership roles of women & the religious practice that helped support it. In the four General Synods held between 1764 & 1782, many changes were made to bring Moravian policies & doctrine into line with that of other Protestants. In the process, women's roles were redefined & greatly limited. Members of the 1764 synod prohibited women from holding any "general" offices with authority over the entire Moravian Church, as Anna Nitschmann had done. In the new directorship established by this synod, women were to be no more than "helpers & advisors." This same synod decided that women's choirs needed male oversight in secular matters. For that purpose, the office of Curator was established. After the synod of 1775, only Bishops could ordain deaconesses & women were even prohibited from assisting in ordinations. Any special religious emphasis for women was also suppressed. In 1783 church leaders scolded the Single Sisters for promoting the Incarnation in their services, saying that the essential point was the "Savior's blood & death" & that the Incarnation belonged to the sanctification of everyone, not just the Single Sisters.

"The fact that efforts to curtail female leadership & women's religious practice began so soon after Zinzendorf's death shows how much he had done to encourage both while he lived. Even his ambivalence towards women supported their leading roles. Because he agreed with the basic eighteenth century view that men must remain superior to women, his reasons why some Moravian women had to govern carried more weight. This same ambivalence meant that his successors could buttress their limitations of women's roles with some of Zinzendorf's own statements, but if Zinzendorf could have visited Moravian settlements thirty years after his death, no doubt he would have regretted the loss of female leadership. After all, he had not only created it, but consistently defended it during his lifetime."

Smaby, Beverly. "Forming the Single Sisters' Choir in Bethlehem." The Transactions of the Moravian Historical Society 28 (1994): 1-14.

Vogt, Peter. "A Voice for Themselves: Women as Participants in Congregational Discourse in the Eighteenth-Century Moravian Movement." In Women Preachers & Prophets through Two Millennia of Christianity, edited by Beverly Mayne Kienzle & Pamela J. Walker, 227-247. Berkeley: University of California Press, 1998. (In print)