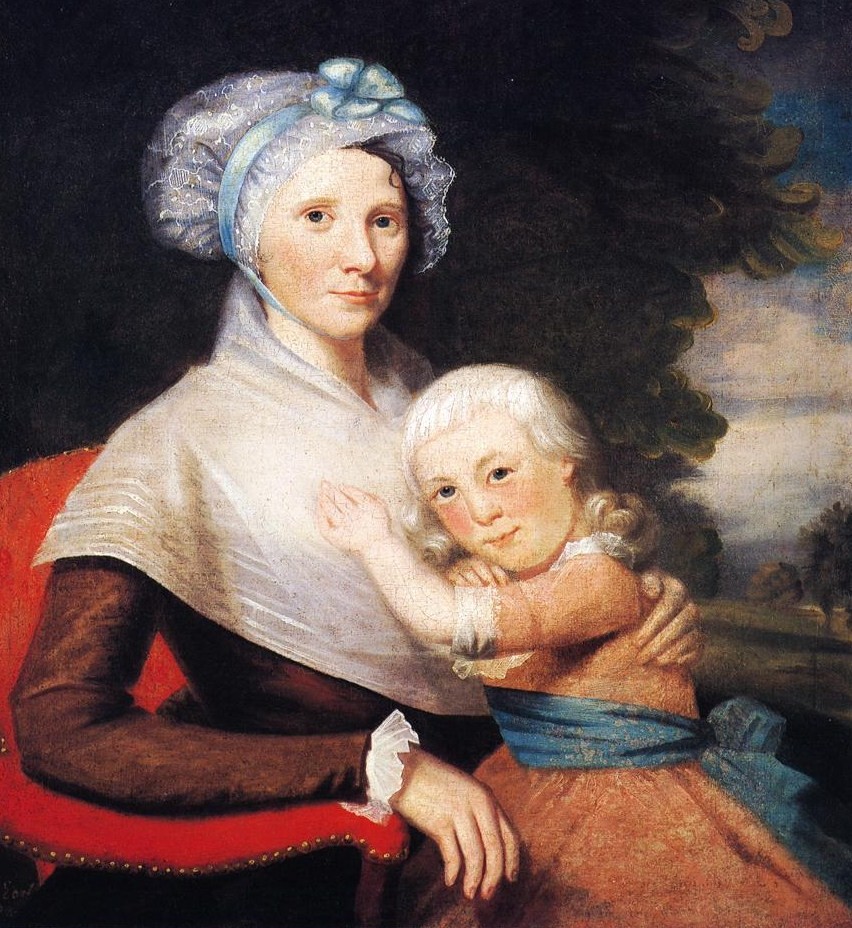 Martha Tennent (1751-1813) was the daughter of Rev. Charles & Martha Tennent of Buckingham, Maryland. She married David Rogers in 1772. Their 12 children were baptized in Greenfield Hill, where her brother William served for a time as minister.  In the portrait she wears a brown dress with long sleeves, & over her shoulders is a large white muslin kerchief. A few curls of her dark brown hair show modestly beneath her white cap, which is tied with a blue bow. According to costume historian Aileen Ribeiro, the indoor cap was "de rigueur in England & America for middle-class married women, particularly in households with strong Protestant beliefs."  Mrs. Rogers is seated in a red upholstered armchair...The extended arms of the chair seem to have been exaggerated for effect. As art historian Elizabeth Kornhauser has noted, the chair is "a variation on the form seen in Earl's English & New York portraits. . . more suited to a gentleman's study or library."

Behind & to the right of Mrs. Rogers appear a meadow & trees. On her lap she holds a child wearing a pink frock with a large blue sash. The child's ash-blond hair is cut with straight bangs & shoulder-length curls. This child is probably Samuel Henry Rogers, who was born on 25 May 1786, 2 years before the portrait was painted. Like his 2 older brothers named Samuel, born in 1782 & 1784, he did not survive childhood. Another son born in 1796 was also named Samuel Henry.  Boys often wore the same loose-fitting frock as girls, until they were 3 or 4 years old. The lack of "aprons and white indoor caps" was a subtle feature that distinguished them from girls. The Rogers had 2 daughters, Martha & Susan or Susanna, born in 1774 & 1778, respectively. Jacobus lists a 3rd daughter, Julia Ann, born in 1794; plus a boy named "Julian."  Martha Tennent's husband Dr David Rogers (1748-1829) was trained as a doctor by his father, Dr. Uriah Rogers of Norwalk, & was licensed to practice medicine in New York City. He probably met the artist Ralph Earl through Dr. Mason Fitch Cogswell, with whom Rogers had served as an army surgeon in Connecticut during the Revolution. Later, in 1792, Rogers & Cogswell were founders of the Connecticut Medical Society.
Posted by Barbara Wells Sarudy at 4:00 AM