Abigail Smith was born on November 11, 1744, in Weymouth, Massachusetts, the 2nd child of Elizabeth Quincy Smith & the Reverend William Smith. Her father was pastor of Weymouth's North Parish Congregational Church.  Carrying out the practical aspects of their religion, Abigail accompanied her mother visiting the sick & distributing food, clothing, & firewood to needy families. Young Abigail educated herself in her father's library. 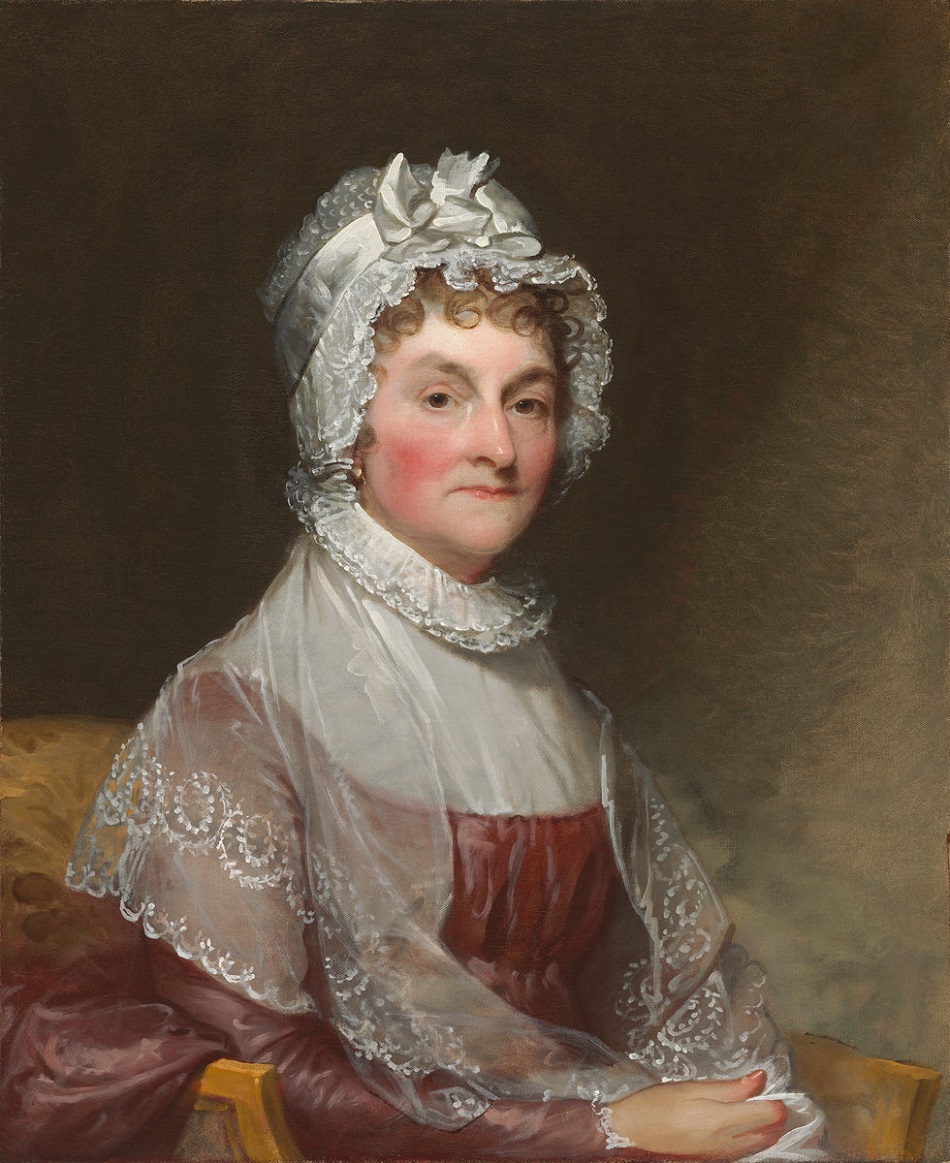 When she was 18, Abigail met John Adams, a young lawyer from nearby Braintree. Even during their 2 year courtship, the young couple spent long periods apart & relied upon writing letters to keep in touch. This pattern would continue throughout their marriage.  On October 25, 1764, the young newlyweds moved into the small house John had inherited from his father in Braintree.   Abigail managed the family's finances & household, as John began to ride the court circuit (traveling from one district to another) building his law career.  On July 14, 1765,  John & Abigail's 1st child, Abigail, was born followed by son John Quincy Adams, Susanna (who died just after her 1st year), Charles, & Thomas Boylston.  The growing family continued to live on John's small farm at Braintree or in Boston, as his practice expanded. Abigail looked after family & home; while John went traveling as circuit judge. "Alas!" she wrote in the snowy December of 1773, "How many snow banks divide thee and me...."

To spend more time with his family, John Adams decided to move them to Boston, because much of his work was there. But even in Boston, long separations kept Abigail from her husband, while he served the country they loved, as delegate to the Continental Congress, envoy abroad, & elected officer under the Constitution. Her letters detail her life in times of revolution. They tell of a woman who stayed at home to struggle with wartime shortages & inflation; to run a farm with a minimum of help; to teach 4 children, when formal education was interrupted. They tell of her loneliness without her "dearest Friend."

The Boston Massacre occurred on March 5, 1770. At the risk of his own popularity & career, John Adams chose to defend 8 British soldiers & their captain, accused of murdering 5 Americans.  Although John was an ardent patriot & favored independence, he felt the soldiers had acted properly & been provoked into firing by an unruly mob. Also, he felt it was important to prove to the world that the colonists were not under mob rule, lacking direction & principles, & that all men were entitled to due process of law. Most Americans, driven by emotion, were livid with Adams for defending the hated "redcoats," but throughout the ordeal Abigail supported her husband's decision. In the end, Adams was proved correct, as all 9 of the men were acquitted of the murder charges. The verdict helped diffuse the immediate crisis. 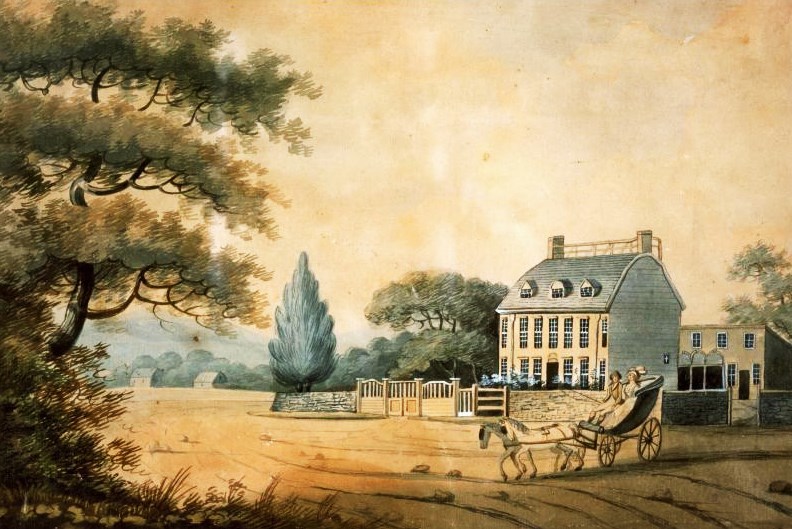 In 1774, John traveled to Philadelphia as a delegate to the First Continental Congress; where the gentlemen agreed to form a government independent of Great Britain. Abigail remained in Braintree to manage the farm & educate the children. Again, letter writing was the only way the Adams could communicate with each other. Their correspondence took on even greater meaning, for Abigail reported to her husband about the British & American military confrontations around Boston. Abigail took her son John Quincy to the top of Penn's Hill near their farm to witness the Battle of Bunker Hill on June 17, 1775.

Not all Americans shared the concept of an independent American nation.  Abigail argued, "A people may let a king fall, yet still remain a people: but if a king lets his people slip from him, he is no longer a king. And this is most certainly our case, why not proclaim to the world in decisive terms your own independence?" In June 1776, John was appointed to a committee of 5 men to prepare a Declaration of Independence from Great Britain. 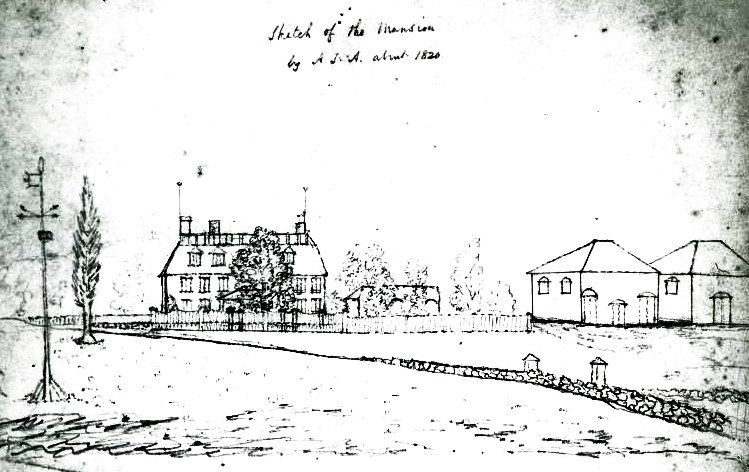 Abigail's vision of independence was broader than that of the delegates. She believed all people, & both sexes, should be granted equal rights. In a letter to John she wrote, "I wish most sincerely that there was not a slave in the province. It always seemed to me to fight ourselves for what we are robbing the Negroes of, who have as good a right to freedom as we have."  Later Abigail added that John & his fellow delegates should "remember the ladies, & be more generous & favorable to them than your ancestors," when they enact new law. Her views were far too progressive for the delegates of the Continental Congress, including John Adams.

John soon was appointed president of the Board of War & turned to Abigail for advice on carrying out his job.  Throughout his career, Adams had few confidants. Thus Abigail advised her husband, & John wrote his wife, "I want to hear you think or see your thoughts." 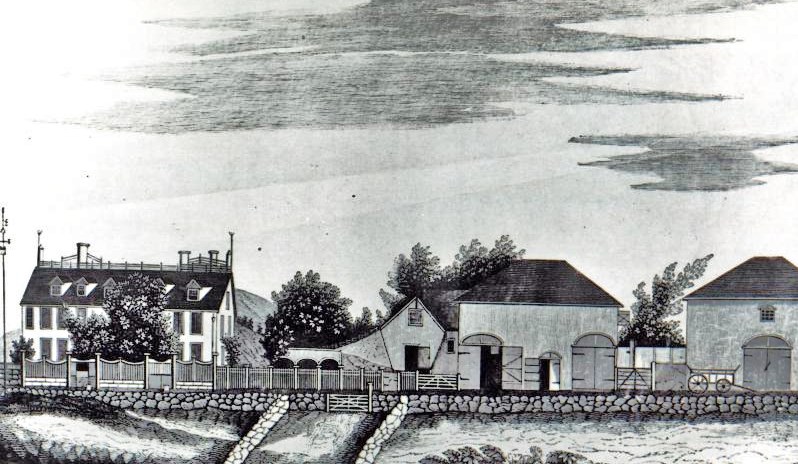 1828 A drawing of The Adams Seat in Quincy by Mrs. George Whitney

In 1778,  John Adams was sent to Paris to negotiate an alliance with France. He remained in Europe from 1778 to 1787, through a succession of different appointments, except for a 3 month period at home; during which time he drafted the Massachusetts Constitution.  Separated from her husband by the Atlantic Ocean, Abigail continued to keep their farm running, paid their bills, & served as teacher to their children. She focused on encouraging the abilities of her son John Quincy, who eventually joined his father in Europe. She wrote to her son, "These are times in which a genius would wish to live. . . . Great necessities call out great virtues."
John Adams by William Joseph Williams, C. 1797.

In 1784, with independence from Great Britain at last secure, Abigail sailed to Europe to join her husband & son. Abigail spent 4 years in France & England, while her husband served as U.S. minister to Great Britain. As the wife of a diplomat, she met & entertained many people in Paris & London. While never at home in these unfamiliar settings, Abigail did her best to enjoy the people & places of both countries. However, Abigail was pleased, when the time came to return home to Braintree in 1788. 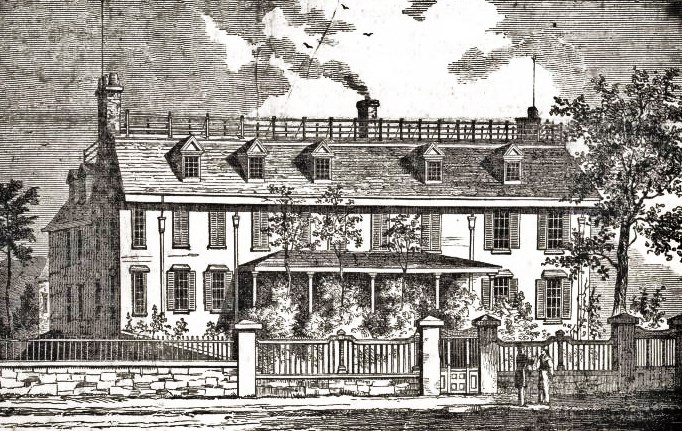 1846 Woodcut of the Residence of John Quincy Adams

The next year, John Adams was elected the 1st vice president of the United States. During the course of the next 12 years as John Adams served 2 terms as vice president (1789-1797) & 1 term as president (1797-1801), he & Abigail moved back & forth between Braintree (the "Old House") & the successive political capitals of the United States: New York, Philadelphia, & then, briefly, into the unfinished White House in Washington, D.C.
Portrait of John Adams by William Winstanley, 1798.

Abigail fought bouts of rheumatism or some autoimmune disease that forced her frequently to retreat to the peace of Braintree recover. After 1791, poor health forced her to spend as much time as possible in Quincy. Illness found her resolute; as she once declared, she would "not forget the blessings which sweeten life."  In 1796, John Adams was elected to succeed George Washington as president of the United States.  Parties were forming. John Adams faced dissent in his cabinet & the vice president, Thomas Jefferson, was head of the opposition party. John realized the problems he faced & wrote to his wife, who was in Quincy recovering from a rheumatic bout, that "I never wanted your advice & assistance more in my life."  Abigail rushed to her husband's side & maintained a grueling schedule to perform all her duties as first lady. She entertained guests & visited people in support of her husband. 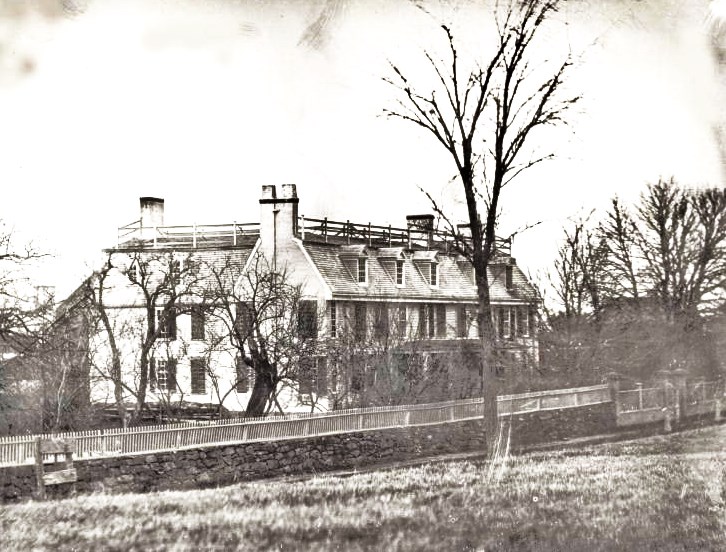 Meanwhile, Great Britain was at war with France, & popular opinion held that America should jump in to aid Great Britain, especially after France demanded bribes. The president felt that war would weaken the United States & decided on an unpopular neutrality. During this time many of Adams' opponents used the press to criticize his policies. Abigail was often referred to as "Mrs. President," for it was widely thought, that the president's decisions were heavily influenced by his wife. In truth, Abigail disagreed with her husband's stand of neutrality; but people believed she was setting his policies, & this weakened John Adams politically. 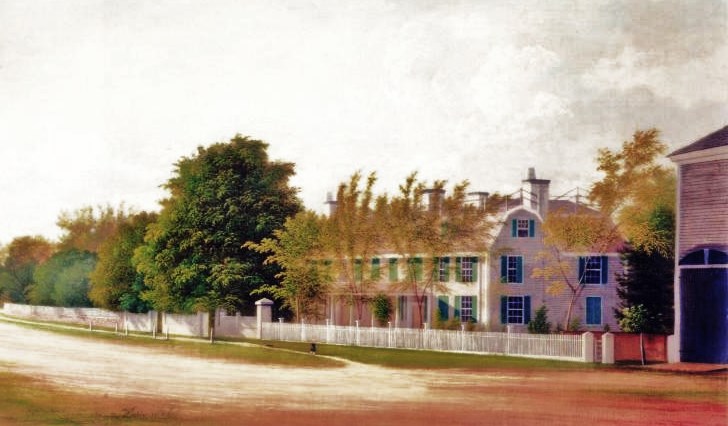 1849 Painting of the Old House of John & Abigail Adams by G. Frankenstein

In 1798, with John Adams' approval, Congress passed the Alien & Sedition Acts, which were aimed at restricting foreign influence over the United States. But the acts proved very unpopular, with Thomas Jefferson & James Madison leading the protest against them. Adams' support of these acts further undermined his popular support, already suffering from his courageous but unpopular stand on war with France.  He was not elected to a 2nd term as president in 1800.
1852 View of the Adams Mansion at Quincy by Mallory, C. 1852 from “Gleasons’ Pictorial Drawing Room Companion” Volume 3, August 21, 1852.

In March 1801, John & Abigail retired to Quincy. During her years there, Abigail occupied herself with improving her home & entertaining visiting family. She saw their son John Qunicy Adams distinguish himself as a U.S. senator, minister to Russia, & secretary of state. In October 1818, Abigail contracted typhoid fever. Surrounded by family members, she died on October 28. John Adams wrote, "I wish I could lay down beside her & die too." 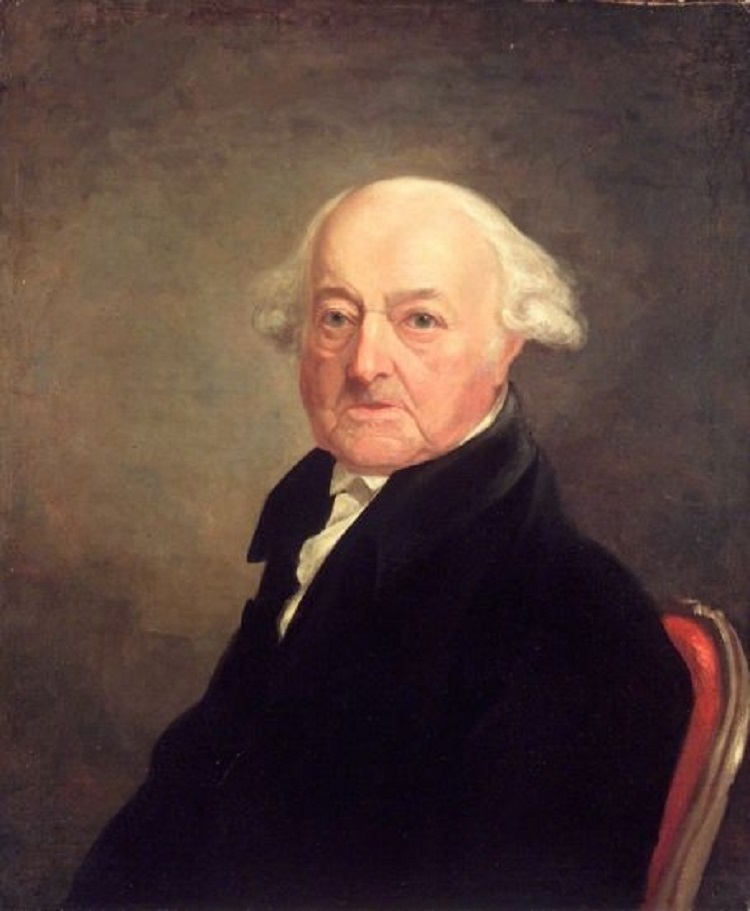