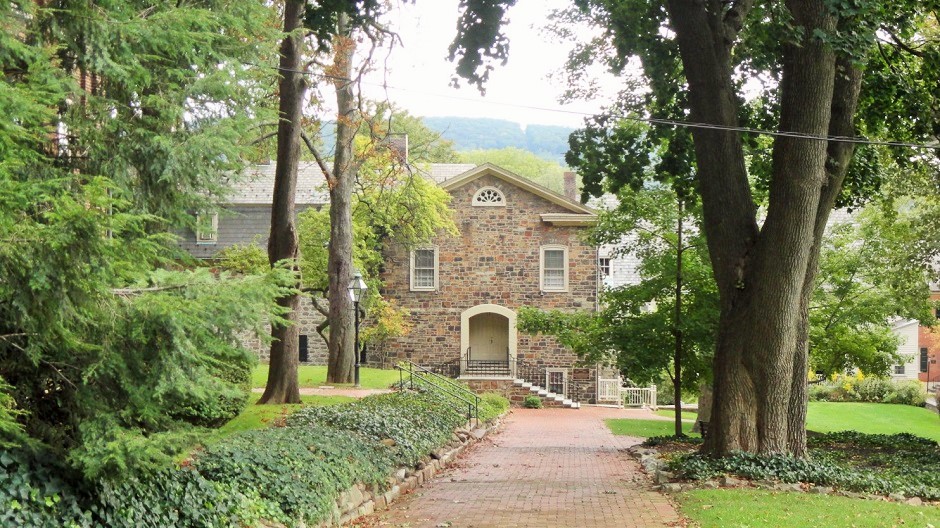 'Moravian funeral processions followed the path above from the Old Chapel to God’s Acre cemetery in Bethlehem, Pa.

'With a little imagination, you can almost hear the trombones at God’s Acre cemetery in Bethlehem, Pa. At the funerals of all 2,617 Moravians buried here since 1742, trombone music accompanied a solemn procession of mourners carrying the dead to their final resting place.

'They were brought here on “death trays,” which are basically large cradles, as I learned on a tour called “Death and Dying in Early Bethlehem: Going Home” offered by the nonprofit organization Historic Bethlehem. It’s a 1¼-hour look at the funeral practices of the Moravians, Protestant settlers from the then-Habsburg-controlled lands of Moravia and Bohemia who settled the area in the 1700s, founding Bethlehem in 1741.

"The tour begins at the Moravian Museum, also known as the 1741 Gemeinhaus, in the town’s oldest building. In the upstairs meeting room, or Saal, where the Moravians worshiped, docent Madeline Morris instructed the men in our group to sit on one side, the women on the other, as the Moravians would have sat.

"In the Moravian community of the day, life was highly regimented. Single men and women lived in separate buildings. “You ate within, were educated within and worshiped within your choir,” said Morris, “choir” in this instance meaning group, not a musical organization.

"You could tell a woman’s age and status — single, married or widowed — by the color of ribbon on her Moravian cap. This was a cap “with a birdlike beak,” Morris told us, like the one she was wearing. She also wore a dress that was fastened down the front with straight pins, as would have been common in 1760. Women “also used hawthorn thorns,” Morris said, to hold their dresses together. I noticed that she never flexed her shoulders, so that the pins stayed in place, and wondered how many pin injuries Moravian women might have sustained.

"The museum contains a music room, because music was very important to the Moravians, who sang as they worked, Morris said. The first recorded use of trombones in America was in 1754 in Bethlehem. Trombones were the primary musical instrument used for celebrations — and a funeral was a celebration.

"Morris told us the story of an ailing woman who heard some anxious theological students practicing their trombones one day as she lay in her sickbed. “Those rascals,” the woman reportedly said. “I’m not dying.” And sure enough, she rallied to spite the students, who were removed from music duty.

"Some blue and white Delftware jugs in the first doctor’s apothecary at the museum still contain some drugs. The room also features a 1788 “kranken stube,” a cushiony easy chair for the sick that’s a contrast to the bare wooden benches mostly used back then.

"We headed outdoors for the rest of the tour. A death tray, on loan from the Central Moravian Church, lay sheltered in an archway near exposed log walls. Morris described the funeral ritual.

"A body, covered by a white cloth and placed on the death tray, would be taken to the corpse house, which no longer exists but once stood near the Old Chapel, the original building of the Central Moravian Church. There was no embalming. The body would perhaps be kept in the corpse house for a few days “if relatives had to come” from afar, Morris said.

"Moravians kept diaries, including their thoughts on death. Indeed, “they aspired to death,” Morris said. “You live for Christ here and long for the day when you meet your savior.” When someone died, his diary would be read at his grave.

"The tour wound uphill past the Old Chapel to the cemetery along the same route trod so many times in bygone years.

"God’s Acre, which is actually three acres, fronts on Market Street and is surrounded by church property on two sides. Flat grave markers hug the ground, all but one exactly alike, because Moravians believed that everybody is equal in death. Lives are reduced to a few lines. Rows and sections are segregated by sex and marital status, as in life.

"The cemetery tour, which stops at a dozen graves, is like a Who Was Who in Bethlehem. John Mueller’s tombstone reads No. 1 because he was the first person buried in the cemetery. To his left rests first-name-only Ben, an Indian who died in 1746. James Burnside, who wasn’t a farmer but became one because that’s what the community needed, died in 1755 of a massive stroke on his plantation, which is now a historic site.

"John Ettwein, administrator of Bethlehem during the American Revolution, “was noted for his principles,” Morris said. He thought that one baker’s pennycakes, a staple treat for children, “were a bit light” and weighed a few. They were. “He wrote a scathing letter to the baker,” who stopped cheating, Morris said.

"Morris showed us a picture of artist John Valentine Haidt, whose religious paintings were carried by Moravian missionaries in North America. Native Americans supposedly wept when they saw his painting of Jesus nailed to the cross, Morris said. She also showed us an illustration of Michael, a native American with red scars and tattoos over much of his body, who became a Christian and was buried in section A in 1758.

"I was moved by the stories in the women’s section. Susanna Louisa Partsch, who had an abusive stepfather, became a missionary and escaped a Delaware Indians massacre by jumping out of a window of a burning building and hiding in a hollow log. Mariana Hoecht, who was captured in 1755 and “given in marriage” to two successive Native Americans, eventually escaped and returned to Bethlehem, where she died at age 34.

"The largest tombstone, in the middle of a paved path, belongs to Juliana Nitschmann, a leader in the community who was known as the mother of Pennsylvania for her work among women.

"Morris pointed out the graves of children either stillborn or dead before they were named, marked with “Beatus” or “Beata,” meaning “blessed one...”

"But for what LoriAnn Wukitsch of Historic Bethlehem describes as “not a ghostly, howly tour,” but fact-based insight into the Moravians, there’s “Death and Dying.” I’d come to Bethlehem to bring the dead to life, and I wasn’t disappointed."
Posted by Barbara Wells Sarudy at 4:00 AM