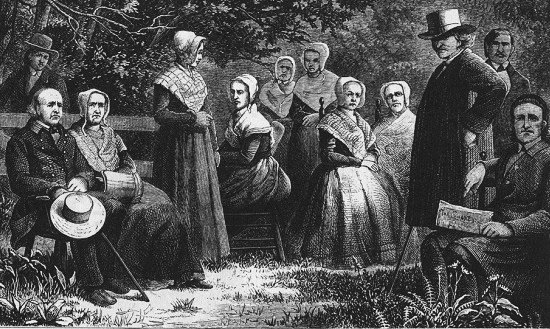 Lucy Wright (1760-1821), a Shaker leader & the dominant figure during the period of the society’s greatest growth, was a female successor to its founder, Ann Lee.

She was born in Pittsfield, Mass., the daughter of John & Mary (Robbins) Wright. Her mother died when she was about 18 years old. The following year she was married to Elizur Goodrich, a young merchant in the neighboring town of Richmond, just before his conversion to Shakerism, which demanded celibacy of it members. This did not bode well for their new marriage.

Elizur Goodrich accepted the gospel which the Shakers were beginning to preach at Watervliet, N.Y. Lucy was sympathetic but did not immediately join the group. In August 1780, when Ann Lee was confined to the Poughkeepsie jail, Lucy sent her presents "for her comfort & convenience.”
Lucy soon became a Shaker, & she & Goodrich quitted their “fleshly relations” & lived in separate men’s & women’s orders. After that, Lucy was renamed Lucy Faith in 1785, & lived at Watervliet. Her husband became an itinerant preacher & finally settled at New Lebanon, N.Y. After her husband left, she often used her maiden name.

In 1787, after the deaths of Mother Ann & Father James Whittaker, Father Joseph Meacham (their successor) selected Lucy Wright as the “first leading character in the female line.”

Under the joint administration of Father Joseph & Mother Lucy, the Believers were gathered together at the mother church in New Lebanon, forming a common-propertied, socio-religious organization which was copied by the 10 other Shaker communities in New York & New England. By this decision the Shakers were transformed from a loosely organized body of followers into an association of monasticlike self-supporting communities.

On Meacham’s death in 1796, Mother Lucy assumed the leadership of the central ministry assisted by one or two “elder brothers.” Under her administration the decision was made, in 1804, to send out the mission which eventually led to the establishment of 7 Shaker societies in Kentucky, Ohio, & Indiana.

She also authorized the publication of the basic theological work of the sect. Benjamin S. Youngs’ The Testimony of Christ’s Second Appearing (1808). Lucy brought more songs into the worship & more lively dances to keep the Shaker meetings animated, & she improved the schools.

She died at Watervliet, at the age of 61 & was buried there beside the grave of Ann Lee.