.
Sophia Wigington Hume (1702-1774), Quaker minister & religious writer, was born in Charleston, SC., one of the children of Henry Wigington (Wiginton), a prosperous landowner & colony official, & Susanna (Bayley) Wigington. Henry Wigington was an Anglican; his wife had been brought up as a Quaker by her mother, Mary Fisher, who had been a minister in England before settling with her second husband in Charleston. Sophia Wigington was reared an Anglican & given an education fit for a young lady of fashion. She was married in 1721, to Robert Hume, a lawyer, landowner, & public official. Two of their children lived to adulthood: Susanna Wigington, born in 1722, & Alexander Wigington, 1729. 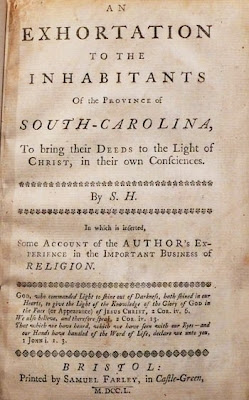 Though her mother returned to Quakerism before 1719, & tried to lead her children in that direction, Sophia Wigington Hume for a time remained a faithful Anglican. By her own account she practiced “the art of japanning with Prints,” lived books & music, delighted in plays & balls, passionately enjoyed fine clothes & jewelry, & walked aristocratically “with mincing Steps & outstretched Neck.” During two illnesses, however, she came to believe that these frivolities endangered her soul. The second crisis, which took place about 1740, three years after her husband’s death, led to a conversion that preoccupied her mind for the rest of her life. Believing that God would spare her only if she would forsake vanity for Quaker simplicity, she burned “the most vile” of her finery, but being a widow in reduced circumstances could not resist the temptation to sell her “Watch & Equipage chased with Heathenish Devices, as also Diamond ornament etc.” Shortly after her recovery she moved to England, where she lived in London near her daughter & finally joined the Society of Friends.

Sophia Hume became a public figure reluctantly in 1747, when she felt a divine call to return to Charleston to reprove the self-indulgences of the inhabitants & call them to repentance. She obeyed the call, even though it meant humiliating herself on the scene of her former elegance. Arriving near the end of the year, she carried out he mission at public meetings in spite of some rude interruptions. She also inspired the city’s small Quaker group to reviver regular worship. To spread her message farther, she wrote An Exhortation to the Inhabitants of the Province of South-Carolina &, to get it printed quickly, took the manuscript to Philadelphia. She spent several happy months in that city & in travel to attend nearby religious meetings & was entertained by leading Friends, who also raised money to publish her book. It was printed before the end of 1748 (& in five later editions in England & America); the author arrived home in London in December or January.

Though she preached publicly in South Carolina & Pennsylvania, Sophia Hume did not receive recognition as a minister from her monthly meeting in London until later, possibly not until 1763. As early as 1752, though, her utterances settled on two topics: decrying luxury & warning its devotees of their dangers; & exhorting Friends to renew sectarian strictness, a theme which probably explains the increasing respect for her ministry as zeal for this goal spread during the 1760’s. Her writings, while always frankly advocating Quaker principles, for the most part developed the first of these topics & were addressed to Christians at large. The Exhortation, with its parade of long quotations from the learned & its extensive examinations of Scripture, actually conveyed a fairly simple appeal for repentance & reformation, its strength derived from Sophia Hume’s lifelong gift for strong phrases & intense, incantation prose.

A Caution to Such as Observe Days & Times (published in its final form c. 1763) was briefer & better organized; though first written to denounce religious festivals, in the later editions it proceeded to offer incisive remarks on a number of theological & social topics. The social ethics were largely traditional, but she expounded a Quaker view of conversion with an unusual emphasis on the "rational pleasure & divine delight” produced by the irradiation of the believer by Christ’s light & the benevolence to all mankind that resulted from true love of God.

Among Quaker women of her day, Sophia Hume had an extraordinary knowledge of the arts, literature, & theology-to some extent the product of her years as an Anglican. Although conversion curbed & guided her intellectual pursuits within limits approved by Quakers, she yet found it hard to justify erudition in a woman-& harder to justify her public life-by her own principles. The result was a paradoxical career: as minister & write she upheld the traditional view that woman should lead a secluded life devoted to home & church; as a Quaker bluestocking she expounded Scripture & culled quotations from ancient & modern Christian writers to defend her sect & its tenet that the indwelling spirit of Christ is the most reliable source of religious truth.

She felt a divine call to service in Charleston again in 1767. The situation was dire: the fellowship of Friends there had dwindled to one, the old wooden meetinghouse was dilapidated, & a backslider claimed to own the land on which it stood. Though often compelled to rest her slight & ailing body, Sophia Hume managed to revive interest in Quakerism by preaching to large public meetings, & tried to persuade London & Philadelphia Friends to replace the old structure with a brick meetinghouse that would stand until God might gather a church to use it. Unable to win support for this plan, she embarked for England in April 1768. She died in 1774, presumably in London, of a seizure described as apoplexy. Her body was interred in Friends’ Burial Ground near Bunhill Fields.