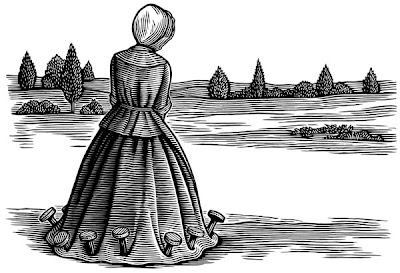 THE House Budget Committee chairman, Paul D. Ryan, a Republican from Wisconsin, announced his party’s new economic plan this month. It’s called “The Path to Prosperity,” a nod to an essay Benjamin Franklin once wrote, called “The Way to Wealth.”

Franklin, who’s on the $100 bill, was the youngest of 10 sons. Nowhere on any legal tender is his sister Jane, the youngest of seven daughters; she never traveled the way to wealth. He was born in 1706, she in 1712. Their father was a Boston candle-maker, scraping by. Massachusetts’ Poor Law required teaching boys to write; the mandate for girls ended at reading. Benny went to school for just two years; Jenny never went at all.

Their lives tell an 18th-century tale of two Americas. Against poverty and ignorance, Franklin prevailed; his sister did not.

At 17, he ran away from home. At 15, she married: she was probably pregnant, as were, at the time, a third of all brides. She and her brother wrote to each other all their lives: they were each other’s dearest friends. (He wrote more letters to her than to anyone.) His letters are learned, warm, funny, delightful; hers are misspelled, fretful and full of sorrow. “Nothing but troble can you her from me,” she warned. It’s extraordinary that she could write at all.

“I have such a Poor Fackulty at making Leters,” she confessed.

He would have none of it. “Is there not a little Affectation in your Apology for the Incorrectness of your Writing?” he teased. “Perhaps it is rather fishing for commendation. You write better, in my Opinion, than most American Women.” He was, sadly, right.

She had one child after another; her husband, a saddler named Edward Mecom, grew ill, and may have lost his mind, as, most certainly, did two of her sons. She struggled, and failed, to keep them out of debtors’ prison, the almshouse, asylums. She took in boarders; she sewed bonnets. She had not a moment’s rest.

And still, she thirsted for knowledge. “I Read as much as I Dare,” she confided to her brother. She once asked him for a copy of “all the Political pieces” he had ever written. “I could as easily make a collection for you of all the past parings of my nails,” he joked. He sent her what he could; she read it all. But there was no way out.

They left very different paper trails. He wrote the story of his life, stirring and wry — the most important autobiography ever written. She wrote 14 pages of what she called her “Book of Ages.” It isn’t an autobiography; it is, instead, a litany of grief, a history, in brief, of a life lived rags to rags.

It begins: “Josiah Mecom their first Born on Wednesday June the 4: 1729 and Died May the 18-1730.” Each page records another heartbreak. “Died my Dear & Beloved Daughter Polly Mecom,” she wrote one dreadful day, adding, “The Lord giveth and the Lord taketh away oh may I never be so Rebelious as to Refuse Acquesing & saying from my hart Blessed be the Name of the Lord.”

On July 4, 1786, when Jane Mecom was 74, she thought about the path to prosperity. It was the nation’s 10th birthday. She had been reading a book by the Englishman Richard Price. “Dr Price,” she wrote to her brother, “thinks Thousands of Boyles Clarks and Newtons have Probably been lost to the world, and lived and died in Ignorance and meanness, merely for want of being Placed in favourable Situations, and Injoying Proper Advantages.” And then she reminded her brother, gently, of something that he knew, and she knew, about the world in which they lived: “Very few is able to beat thro all Impedements and Arive to any Grat Degre of superiority in Understanding.”

That world was changing. In 1789, Boston for the first time, allowed girls to attend public schools. The fertility rate began declining. The American Revolution made possible a new world, a world of fewer obstacles, a world with a promise of equality. That required — and still requires — sympathy.

Benjamin Franklin died in Philadelphia in 1790, at the age of 84. In his will, he left Jane the house in which she lived. And then he made another bequest, more lasting: he gave one hundred pounds to the public schools of Boston.

Jane Mecom died in that house in 1794. Later, during a political moment much like this one, when American politics was animated by self-serving invocations of the founders, her house was demolished to make room for a memorial to Paul Revere.

Jill Lepore, a professor of American history at Harvard, is the author of “The Whites of Their Eyes: The Tea Party’s Revolution and the Battle Over American History.”
Posted by Barbara Wells Sarudy at 4:00 AM