.
Marylander Ann Teresa Mathews (1732-1800), founder with Frances Dickinson (1755-1830), of the 1st Roman Catholic convent for women in the United States, was born in Charles County, one of 3 children of Joseph & Susannah (Craycroft) Mathews. Her father, who was descended from a Catholic family prominent in 17th-century Maryland, died when she was 2, leaving the family a 345-acre farm, a sparsely furnished house, & 2 slaves. Her widowed mother kept a deeply religious household, for her daughter, Ann, her son Ignatius, & 3 of her son William’s children entered religious life.

Although Maryland was originally settled as a refuge for Roman Catholics, since the 18th-century in Maryland, Roman Catholics were not permitted to hold public mass, & those who wished to train for a life in the church necessarily went abroad. Thus in 1754, Ann Mathews sailed to Hoogstraeten, Belgium, to enter the English monastery of the Discalced Carmelites, a contemplative order springing from the works & influence of the mystic St. Teresa of Spain. Its severe rules included a ban on shoes, hence the name Discalced. On Sept. 30 of that year she took the habit of the order & the name Bernardina Teresa Xavier of St. Joseph, & on Nov. 24, 1755, at age 23, she made her profession. Staying on at the convent, she served as mistress of novices before being elected prioress in 1774. 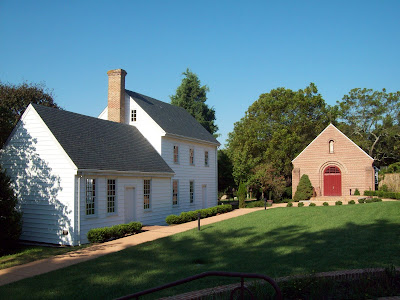 Mother Bernardina began to think of founding an American carmel, as the Revolution had removed the disabilities of Roman Catholics in Maryland. Encouraged by some of the prominent Catholics in her state, as well as by her brother Ignatius, a Jesuit priest, she made plans for such a move with a former Charles County neighbor, Mary Brent, who as Mother Mary Margaret of the Angels had become prioress of the English carmel at Antwerp. Unfortunately Mother Margaret died in 1784, but Mother Bernardina’s nieces, Ann Teresa & Susanna Mathews, arrived that year at Hoogstraeten to make their professions & to join in the venture. Indispensable support came from the Rev. Charles Neale, a relative of Mother Bernardina & confessor to the Antwerp carmel. It was 1790, however, before sufficient money & the necessary authorizations were gathered for the founding of an American carmel. On April 19, 1790, 4 nuns, accompanied by Father Neale, left Hoogstraeten for the Maryland. They included Mother Bernardina, now 58, her two nieces, & Frances Dickinson.

Frances Dickinson, born in London, had assumed the Carmelite habit at Antwerp on May 1, 1772, when only 16, & with it the name Clare Joseph of the Sacred Heart of Jesus. Her letters & a diary show that she possessed self-awareness & a sense of humor. By July 20, 1790, the nuns were at Chandler’s Hope, Father Neale’s childhood home in Charles County, on a hill overlooking the Port Tobacco River. Here, resuming their religious habit & practices, they established the first convent within the United States. As Chandler’s Hope quickly proved too small for their purposes, Baker Brooke, a Maryland Catholic offered them 886 acres & a newly built house a little farther up the Port Tobacco Valley. On Oct. 15, 1790, the 4 nuns moved to their new quarters, which they dedicated to the Sacred Heart of Jesus, Mary, & Joseph.

At the outset the nuns faced a critical decision, Maryland’s Bishop John Carroll had hoped that they would be willing to modify the rules of their order enough to allow them to teach. He gained a dispensation from Rome in 1793, but they asked not to make use of it & set themselves instead to the task of training newcomers to a life of prayer & contemplation. By 1794, a 2nd building was ready & four novices were admitted; by 1800 there were 14 nuns; & by 1818 the number had jumped to 23. The new arrivals brought family slaves & other property which, becoming part of the convent’s resources, made it nearly self-sufficient. In the Maryland countryside, there was less time for contemplation than in Belgium, but the nuns kept the Psalter before them, as they spun yarn from the wool of their own sheep to weave into cloth for their habits.

When Mother Bernardina died 1800, Bishop Carroll made Clare Joseph temporary prioress until her death 30 years later. For many years the little community flourished. In a letter to England in 1807, Mother Clare Joseph spoke of plentiful crops, of the pleasant & healthy situation, & of the advantages of its isolation “suitable to our eremitical Order.” In 1818, Archbishop Ambrose Marechal wrote with pride to Rome of the piety of the nuns.

A long & expensive lawsuit over their land (1818-29), however, brought financial difficulties; & the death in 1823, of Father Neale, was more than a spiritual loss, for the plantation began to be insufficient for the support of the convent. Mother Clare Joseph died there in 1830; & in 1831, the carmel moved to Baltimore.

Most of the later carmels in the United States have sprung from this convent or its branches, so that Ann Mathews & Frances Dickinson established the Carmelite order in the United States. Although in Baltimore the nuns were finally obliged for a time to teach in order to maintain themselves, Carmelite traditions & training in the contemplative life had been well established during previous 4 decades.

As they left in 1831, according to an almanac published by the nuns, there was a tradition in southern Maryland, that the faithful would pray for the return of the nuns. In 1933, the people of Charles County began to restore the original monastery residence, and the nuns did return in 1976. The monastery in Charles County, Maryland, is still the active home of the discalced Carmelite Nuns of the Carmel of Port Tobacco, who do not teach or have contact with the public.