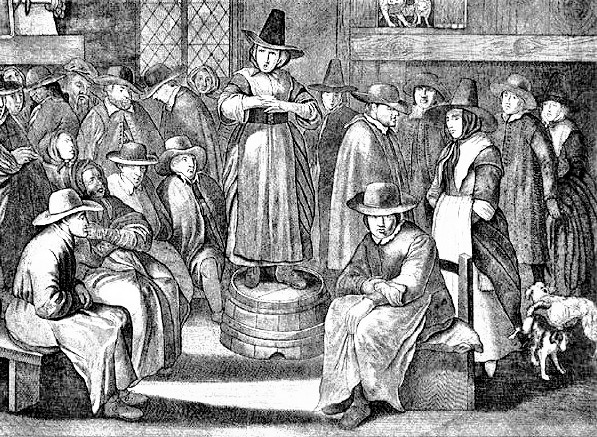 Mary Peisley was a Quaker missionary from Ireland, who visited North Carolina's remote back roads & Indian paths in 1753-54 with her compnion Catherine Phillips. Together the two women explored the Carolina backcountry, followed the Cape Fear River to Wilmington & traveled north to the old Quaker meetings above the Albemarle Sound.

Mary Peisley wrote about the trials of traveling in the colony. “We rode two days & an half, & lay two nights in the woods, without being under the roof of a house,” she wrote at one point.

Elsewhere she recalled that they experienced “abundant hardships & sufferings of body” & often found “lodging in the woods in cold frosty weather, on damp grounds with bad firing.”

Yet, in a letter to an uncle, she also described the tranquility that she sometimes found in those hard circumstances. “I have sat down by a brook in the woods, eat my Indian-corn bread, & drank water out of a calabash, with more content & peace of mind than many who were served in plate, & at night have slept contentedly in my riding clothes, on a bed hard enough to make my bones ache, & the house so open on every side as to admit plenty of light & air.“

She wrote to her uncle, “I have compared my passage through these woods, to my pilgrimage through the world, & indeed in some things it bears a just resemblance; the path we rode through was exceeding narrow, & sometimes so closed as not to see a footstep before me, caught by boughs on one hand & bushes on the other, obliged to stoop very low, lest my head should be hurt or eyes pulled out: this I compare to the entangling things of the present world, which are ready to catch the affections on every side & blind the eyes of the soul.”

In that letter to her uncle, Peisley talked of astonishment at the degree of sickness & illness in the Carolina backcountry. “I do not remember that we have been in a house or family since we left Charleston, but one or more were ill of a fever or ague, so that it seems like an universal contagion which has overspread the inhabitants of this quarter.“

Often times the local religious meetings disappointed Peisley, but she & Phillips also preached at gatherings that lifted her spirits above the cold & illness around her.

After a meeting by the Neuse River, for instance, she wrote, “we had a large & comfortable meeting, in which I thought it might be truly said the Lord’s power was over all, & that even devilish spirits were made subject to that power, by which we were assisted to speak.”

As they rode from one Quaker meeting to the next, Mary Peisley remembered, they “were often kindly entertained, according to their ability, at the houses of these not of our society.” In her letters & journals, she expressed gratitude to those non-Quakers who gave them supper or took them in for a night’s lodging.

“Sometimes,” though, she wrote, “at our first entrance they would look strangely at us, because they understood not the lawfulness of women’s preaching, having never heard any.”

They stood out as women ministers, but they also were out of the ordinary, of course, because they were unmarried women & not traveling in the company of a husband, father, brother or son. “Thus did we pass for a sign & wonder,” Peisley wrote.

Though unaccustomed to women ministers, the local people had grown used to seeing other kinds of women traveling in the colony on their own.

In Some Account of the Life, Peisley recalled: “Some would say, when invited to a Quaker meeting, that we were women who ran from our own country for some ill act.” But the roadside inhabitants of colonial North Carolina took the women into their homes anyway.

She knew that they were unfamiliar with the role of women in early Quakerism. She also understood that they were “not …  acquainted with the supernatural power of love, which had influenced our hearts, nor the rules & discipline of friends.“

According to Peisley, many of those who greeted them so warily eventually even proved willing to listen to their Quaker teachings. “Through divine favour,” she wrote, “I have not heard of any of them who went away dissatisfied…”

See: Mary Peisley Neale's Some Account of the Life & Religious Exercises of Mary Neale, formerly Mary Peisley (Dublin, 1795) gives a view of their journey. Also from her journals & letters, her widowed husband, Samuel Neale, published the volume in Dublin in 1795.