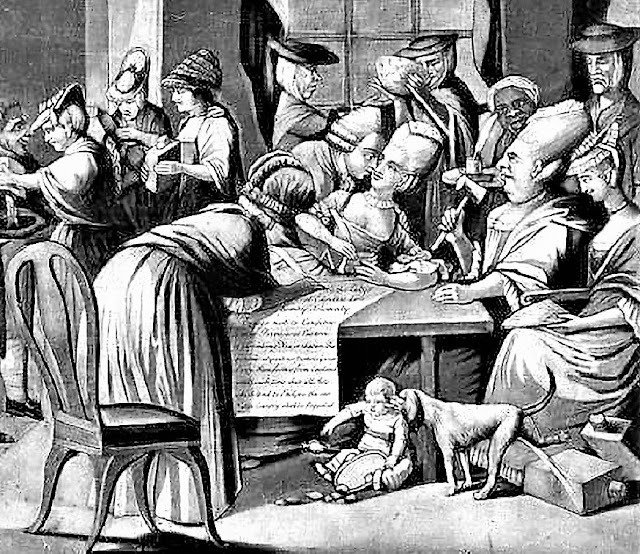 Detail Philip Dawes, A Society of Patriotic Ladies at Edenton in North Carolina. Published in London in 1775.

The Boston tea party occurred in December 1773, when angry gentlemen of Boston, some costumed as Native Americans, destroyed property of the East India Tea Company on ships in the Boston harbor in protest of British taxation & trade policies.  There were other 18C colonial patriotic tea parties as well.

The livid English Parliament quickly passed a set of laws to punish the upstart colonials in Massachusetts, closing the Boston port & limiting all British American colonial rights to self-government. Many American colonists up & down the Atlantic called these the “Intolerable Acts” — the final proof that Great Britain intended to destroy their liberty. 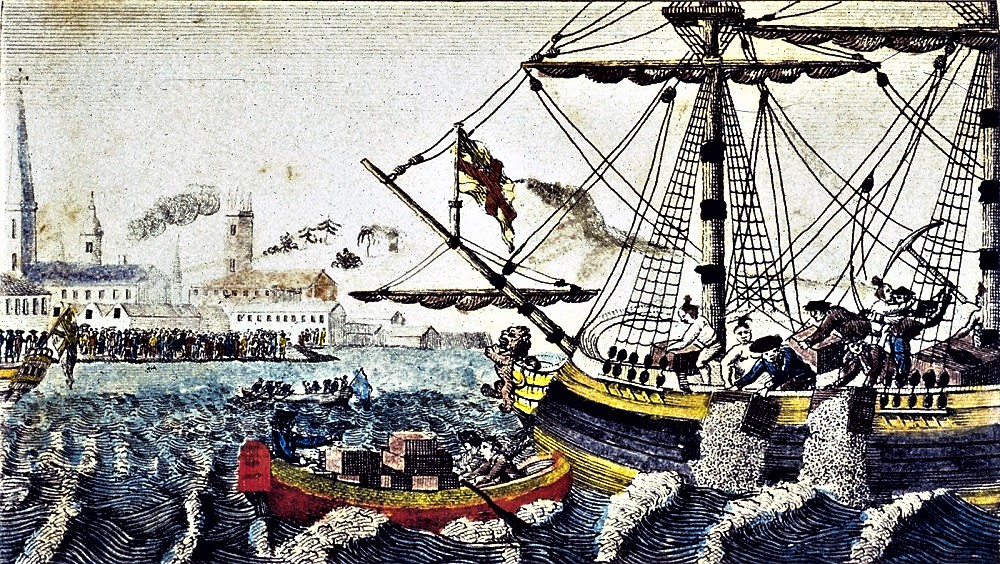 After the Boston tea party, gentlemen began meeting in local groups throughout the colonies to lend their support to the rising talk of revolution. (Mostly men were meeting, because women did not vote or hold office in the 18C Britain or her colonies.)

In July 1774, gentlemen of the Cape Fear region, led by transplanted Boston attorney William Hooper (1742-1790), met at Wilmington, North Carolina, calling for a provincial congress & for a congress of all the colonies to respond to Britain. One of the resolutions passed at this meeting stated, "That we will not use nor suffer East India Tea to be used in our Families after the tenth day of September next, and that we will consider all persons in this province not complying with this resolve to be enemies to their Country."

The Edenton Tea Party first became known throughout colonial British America from a London newspaper article reporting the event, which appeared in the Morning Chronicle and London Advertiser in January of 1775.  The newspaper reported that in North Carolina on October 25, 1774, 51 prominent women from the Edenton area gathered at the home of Elizabeth King, with Penelope Barker (1728-1796) presiding, to sign a petition supporting the American cause. It was extremely rare, if not unheard of, for British women, especially colonial women, who had no legal powers, to petition for political change.

At the meeting, Barker reportedly said, “Maybe it has only been men who have protested the king up to now. That only means we women have taken too long to let our voices be heard. We are signing our names to a document, not hiding ourselves behind costumes like the men in Boston did at their tea party. The British will know who we are.”

The Edenton petition doesn’t actually mention tea, but it supports the July Wilmington “resolves” against importing British products such as clothing & tea. Many angry colonists participated in the resistance to Britain through nonimportation, simply refusing to buy goods imported from Britain. Colonials did not have to pay taxes on goods they did not purchase, and the loss of income might persuade British merchants & shippers to support the colonial cause.

The text of the petition by the women gathered in Edenton, North Carolina, on October 25, 1774, reads: As we cannot be indifferent on any occasion that appears nearly to affect the peace and happiness of our country, and as it has been thought necessary, for the public good, to enter into several political resolves by a meeting of Members deputed from the whole Province,
it is a duty which we owe, not only to our near and dear connections who have concurred in them, but to ourselves who are essentially interested in their welfare, to do every thing as far as lies in our power to testify our sincere adherence to the same; and we do therefore accordingly subscribe this paper, as a witness of our fixed intention and solemn determination to do so.
Signed:
Abagail Charlton, Mary Blount, F. Johnstone, Elizabeth Creacy, Margaret Cathcart, Elizabeth Patterson, Anne Johnstone, Jane Wellwood, Margaret Pearson, Mary Woolard, Penelope Dawson, Sarah Beasley, Jean Blair, Susannah Vail, Grace Clayton, Elizabeth Vail, Frances Hall, Elizabeth Vail, Mary Jones, Mary Creacy, Anne Hall, Mary Creacy, Rebecca Bondfield, Ruth Benbury, Sarah Littlejohn, Sarah Howcott, Penelope Barker, Sarah Hoskins, Elizabeth P. Ormond, Mary Littledle, M. Payne, Sarah Valentine, Elizabeth Johnston, Elizabeth Cricket, Mary Bonner, Elizabeth Green, Lydia Bonner, Mary Ramsay, Sarah Howe, Anne Horniblow, Lydia Bennet, Mary Hunter, Marion Wells, Tresia Cunningham, Anne Anderson, Elizabeth Roberts, Sarah Mathews, Elizabeth Roberts, Anne Haughton, Elizabeth Roberts, Elizabeth Beasly.

From England, in January 1775, 16 year-old Arthur Iredell wrote to his older brother who was a judge based in Edenton, James Iredell (1751-1799), describing the British reaction to the Edenton Tea Party. According to Arthur Iredell, the incident was not taken seriously in England, because it was led by women.

British journalists & cartoonists depicted the women in a negative light, as bad mothers & loose women. In a satirical cartoon published in London in March of 1775, the North Carolina ladies were drawn as female versions of the much maligned macaroni characters of the period.

Arthur Iredell sarcastically wrote to his brother James, who would later become one of the first associates of the United States Supreme Court, back in North Carolina, I see by the newspapers the Edenton ladies have signalized themselves by their protest against tea-drinking. The name of Johnston [the maiden name of Mrs. James Iredell] I see among others; are any of my sisters relations patriotic heroines? Is there a female congress at Edenton, too? I hope not, for we Englishmen are afraid of the male congress, but if the ladies, who have ever since the Amazonian era been esteemed the most formidable enemies: if they, I say, should attack us, the most fatal consequence is to be dreaded. So dextrous in the handling of a dart, each wound they give is mortal: whilst we, so unhappily formed by nature, the more we strive to conquer them, the more we are conquered.The Edenton ladies, conscious, I suppose, of this superiority on their side, by a former experience, are willing, I imagine, to crush us into atoms by their omnipotency: the only security on our side to prevent the impending ruin, that I can perceive, is the probability that there are but few places in America which possess so much female artillery as Edenton.

Not about to be outdone by their neighbors & not at all deterred by the sarcastic English press, the patriotic ladies of Wilmington, North Carolina, held their own “party” in the spring of 1775, actually burning their tea.

Janet Schaw, a visitor from Scotland who had no sympathy for the colonial rebellion, reported the event in her journals, noting that not everyone in Wilmington approved of the protest: The Ladies have burnt their tea in a solemn procession, but they had delayed however till the sacrifice was not very considerable, as I do not think any one offered above a quarter of a pound. The people in town live decently, and tho’ their houses are not spacious, they are in general very commodious and well furnished. All the Merchants of any note are British and Irish,and many of them very genteel people. They all disapprove of the present proceedings. Many of them intend quitting the country as fast as their affairs will permit them, but are yet uncertain what steps to take.

But the women patriots had just begun to fight. Purdie's Virginia Gazette reported on May 3, 1775, that women were giving their jewelery to support the Continental Congress like “Roman Females” before them and will “fearless take the field against the ememy” for their glorious cause if their services are needed.

Women began to write letters about the revolutionary cause to their local newspapers. One anonymous women wrote a letter urging her fellow women to sacrifice for the war in Dixon's Virginia Gazette of January 13, 1776. Anne Terrel of Bedford County, Virginia also wrote in the same newspaper to support of the Revolutionary War on September 21, 1776.

During the Revolution more than 20,000 women became army camp followers--cooking, laundering, mending, and acting as nurses for the soldiers. Camp followers received half the food ration, when there was food at all, and minimal compensation. When the British occupied a town, they sometimes brutalized colonial women & their children. Hundreds of women took up arms to serve as soldiers & others served as spies for the colonial army.

Even those women left at home to raise the family & manage the business or the farm helped as they could. One woman passing an evacuated house in Woodbridge, New Jersey, looked in the window & saw a drunken Hessian soldier. She went home, got an old firelock, returned to take the Hessian’s firearms & then walked him about a mile to the patrol guard of the New Jersey regiment to delivered her prisoner. The incident was reported in Dixon's Virginia Gazette on April 18, 1777.

As the war progressed, women began collecting & contributing funds to equip local troops, where their kinfolk & neighbors were serving. The light horsemen of General Nelson of the Virginia Cavalry received just such donations according to Purdie's Virginia Gazette of June 12, 1778.

After the successful war, most male landowners could vote in the new republic. Women were granted the right to vote in the United States of America in 1920.
Posted by Barbara Wells Sarudy at 4:00 AM