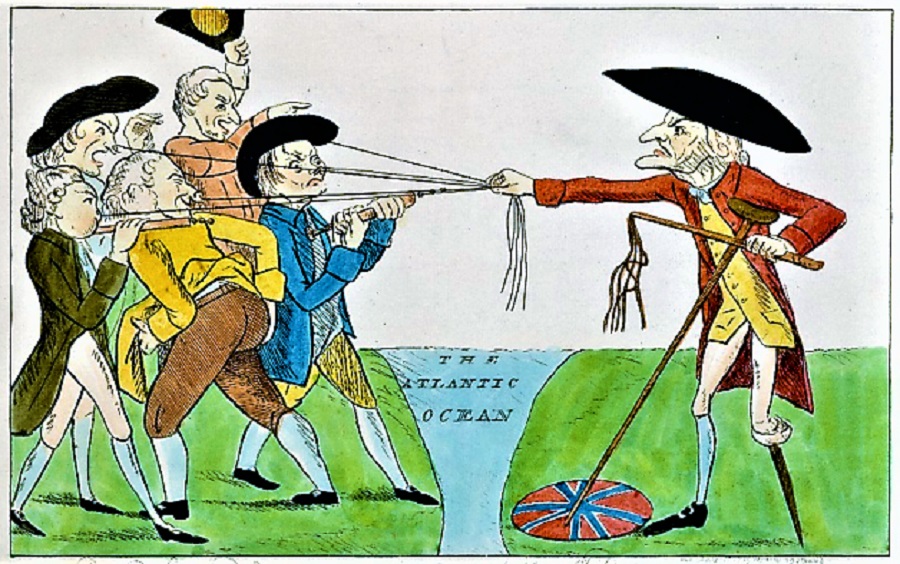 No single event caused the American Revolution. A series of events that led to the war. Essentially, it all began as a disagreement over the way Great Britain treated the men & women in the British American colonies on the Atlantic Coast of North America and the way the colonists felt they should be treated. Americans felt they deserved all the rights of British citizens. The British, on the other hand, felt that the colonies were created to be used in the way that best suited the Crown and Parliament. This conflict is embodied in one of the rallying cries of the ​American Revolution: No Taxation Without Representation.  If the homeland British could not agree with their North Atlantic colonists only about one-third of those colonists supported a rebellion. One-third of the population supported Great Britain, and the other third were neutral.


The early existence of colonial legislatures meant that the colonies were in many ways independent of the crown. The legislatures were allowed to levy taxes, muster troops, & pass laws. Over time, these powers became rights in the eyes of many colonists. The British government had different ideas & attempted to curtail the powers of these newly elected bodies. There were numerous measures designed to ensure the colonial legislatures did not achieve autonomy & many had nothing to do with the larger British Empire. In the minds of colonists, they were a matter of local concern.

The Quartering Act of 1765 was a law passed by Parliament that required colonists to provide housing accommodations for British troops, even during peacetime. Although the act did not force colonists to house soldiers in private homes, it did require that public buildings & unoccupied private structures be made available to the troops. 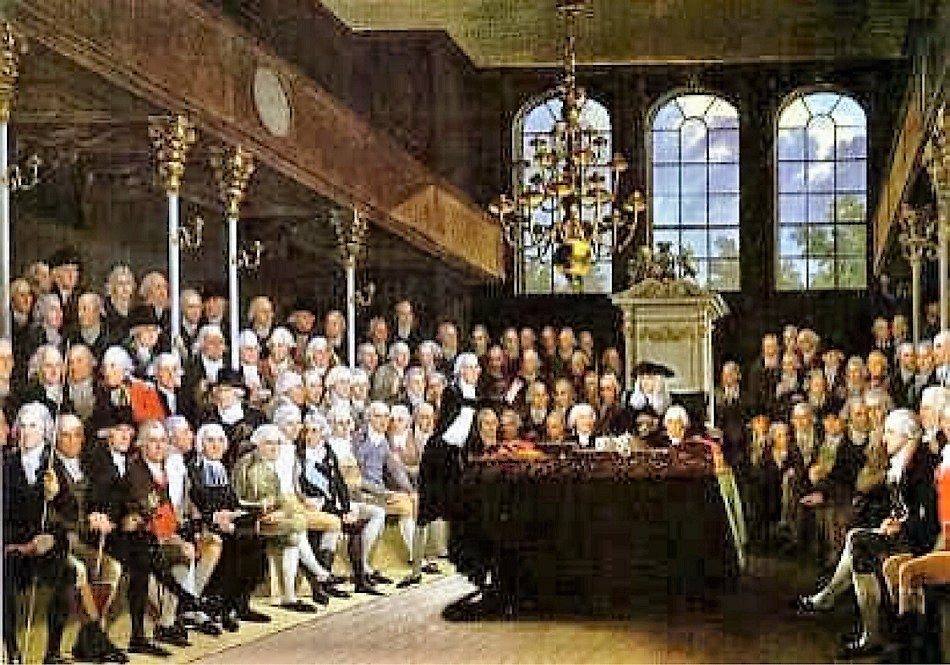 In March 1765, the British Parliament passed the Quartering Act to address the practical concerns of troop deployment in the British American colonies. Under the terms of this legislation, each colonial assembly was directed to provide for the basic needs of soldiers stationed within its borders. The Quartering Act of 1765 required colonial governments to absorb the costs associated with quartering British troops which included food, shelter, bedding, cooking utensils, firewood, salt, vinegar, beer or cider, & candles. This law was expanded in 1766, to require the assemblies to billet soldiers in taverns & unoccupied houses.

The French & Indian War (the Seven Years War 1754-1763)) was between France & Britain for possession of North America. During this time it is estimated that over 25,000 troops were sent from Britain to America. The British commanders, led by Lieutenant General Thomas Gage, had found it difficult to persuade some colonial assemblies to pay for the quartering & provisioning of troops, as required by law in the 1686 Mutiny Act. The majority of colonies had supplied quartering for British troops during the war, but the issue was disputed in peacetime. The French & Indian War ended in victory for the British in 1763. Lieutenant General Thomas Gage reported the quartering problems he had encountered to the British Parliament. His experiences with uncooperative colonists was one of the issues that led to the Quartering Act of 1765.

British motivations for enforcing the Quartering Act were mixed. Some officials were legitimately concerned about protecting the colonies from attack & viewed this law as a logical means to do so. Also part of the calculation, however, was a desire to cut costs. If the colonies were to be protected, why should they not pay for the soldiers? In particular, the British ministry was faced with the prospect of bringing home the French & Indian War veterans & providing them with pay & pensions. If those soldiers could be kept in service in America, the colonies would pay for them & spare a tax-weary English public from additional burdens.

In April 1763, George Grenville became the British Prime Minister. Grenville needed to reduce the national debt. Before the French & Indian War the British national debt was only 72 million pounds. By the end of the French & Indian War in January 1763, the debt had escalated to almost 130 million pounds. The cost of bringing the British army back to Britain could be avoided if the soldiers remained in the colonies - so the forces stayed in America as a standing army, through the provisions of the Quartering Act.

To pay the war debt the British ended their policy of Salutary Neglect in the colonies. They started to enforce the laws of the Navigation Acts and looked for ways of imposing new taxes in the colonies. If they were to collect the new taxes the British would needed a strong military presence to enforce the new measures - the Quartering Act would help them achieve this.  Peace in the colonies allowed the British to look for ways of gaining revenue from America & protecting British interests of the merchants in Britain.  The British sent an additional 40,000 soldiers to the colonies in 1765 to protect the borders of the colonies & also to help to collect taxes from the colonists - it was a British show of force.  The concerns of the American colonists were growing with each change imposed by the British government in particular the Quartering Act, as they believed that the British army could easily turn on the colonists.

The British victory in the French & Indian Wars, saw the start of differences in the aspirations of those in England & those colonists in America. The 13 colonies were looking to expand their territories to the west. The British did not agree. The Proclamation of 1763 was designed to calm the fears of Native Indians by halting the westward expansion by colonists while expanding the lucrative fur trade. The introduction of the massive boundary, Proclamation Line, required the establishment, & the manning, of posts along the border - which the British administration argued was for the defence of the colonists & could be implemented through the Quartering Act.

The colonies disputed the legality of the Quartering Act of 1765, as it appeared to violate the 1689 English Bill of Rights, which forbade the raising or keeping a standing army without the consent of parliament. No standing army had been kept in the colonies before the French & Indian War, so the colonies questioned why a standing army was needed after the French had been defeated. Colonial debts were high, & the colonists stated that they could not afford to maintain British troops. The colonists resented the presence of the British & feared the use of troops against themselves.

AN ACT to amend & render more effectual, in his Majesty's dominions in America, an act passed in this present session of parliament, intituled, An act for punishing mutiny & desertion, & for the better payment of the army & their quarters.

II
And it is hereby declared & enacted, That there shall be no more billets at any time ordered, than there are effective soldiers present to be quartered therein: & in order that this service may be effectually provided for, the commander in chief in America, or other officer under whose orders any regiment or company shall march, shall, from time to time, give ... as early notice as conveniently may be, in writing, signed by such commander or officer of their march, specifying their numbers & time of marching as near as may be, to the respective governors of each province through which they are to march....

III
[Military officers taking upon themselves to quarter soldiers contrary to this act, or using any menace to a civil officer to deter them from their duty, to be cashiered. Persons aggrieved by being quartered on may complain to the justices, & be relieved.]

VII
And whereas there are several barracks in several places in his Majesty's said dominions in America, or some of them, provided by the colonies, for the lodging & covering of soldiers in lieu of quarters, for the ease & conveniency as well of the inhabitants of & in such colonies, as of the soldiers; it is hereby further enacted, That all such officers & soldiers, so put & placed in such barracks, or in hired uninhabited houses, outhouses, barns, or other buildings, shall, from time to time, be furnished & supplied there by the persons to be authorized or appointed for that purpose by the governor & council of each respective province, or upon neglect or refusal of such governor & council in any province, then by two or more justices of the peace residing in or near such place, with fire, candles, vinegar, & salt, bedding, utensils for dressing their victuals, & small beer or cyder, not exceeding five pints, or half a pint of rum mixed with a quart of water, to each man, without paying any thing for the same....