America depicted as a Woman - The earliest 18C Lady Liberties 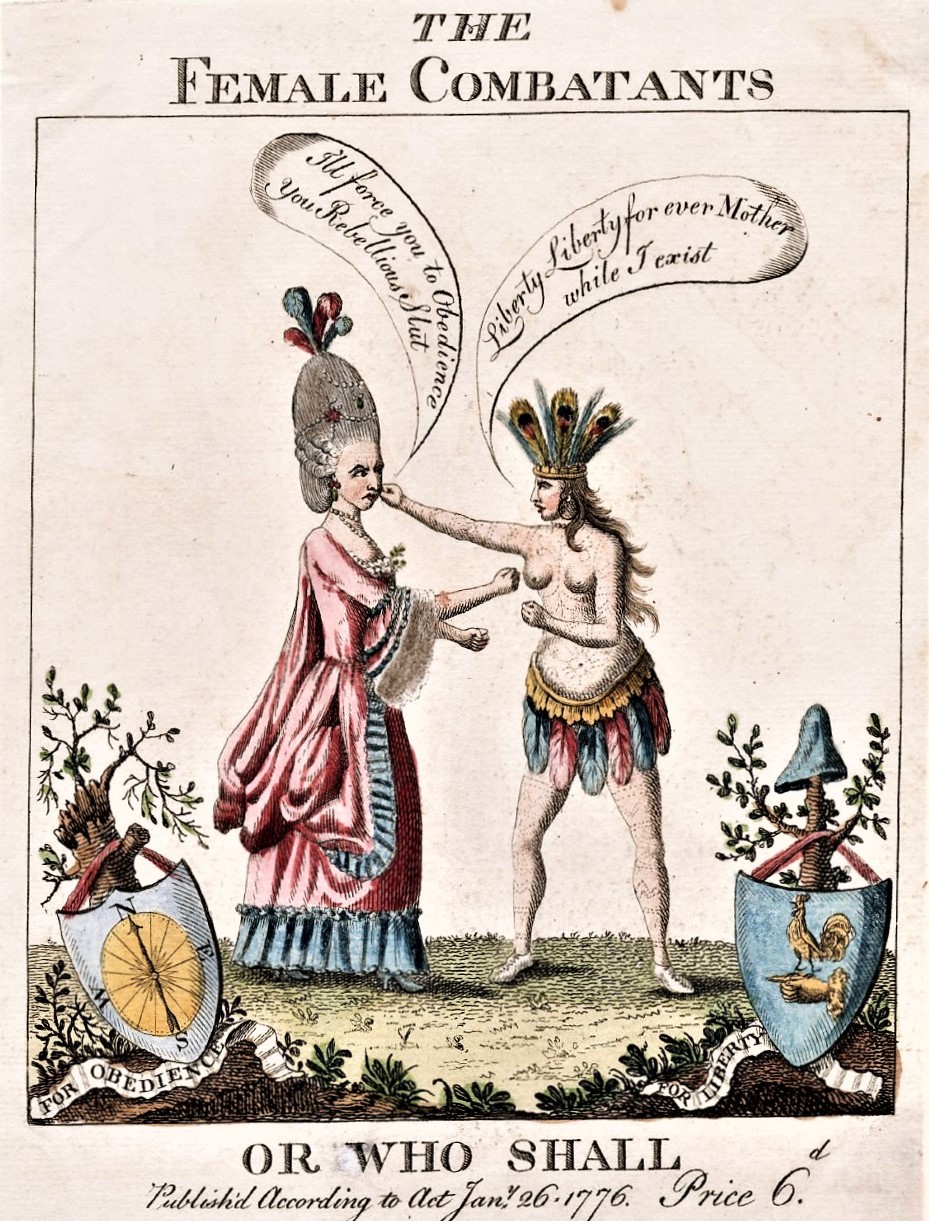 English printmakers & editorial writers had been attacking the outlandish excesses of British fashions of the period by the time Paul Revere chose this image.

Paul Revere's logotype for the 1774 Royal American Magazine, depicts America as an Indian figure offering a calumet (a Native American peace pipe) to the genius of Knowledge. 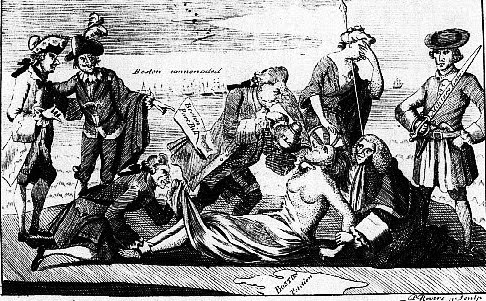 In this engraving, Paul Revere (1735-1718) uses what appears to be an Indian woman to depict America being subjugated by British ministers, who are forcing her to drink vile tea for her own good. The engraving comes as close as it dare to depicting the rape of America. Here the lady portrayed as America is wearing a classic draped gown that has been torn away from her body.

The bystanders, Spain & France, are horrified & tempted, just tempted mind you, to come to the aid of the ravished American colonies. In the background, Revere depicts his beloved Boston's skyline with the label "cannonaded." A torn & shredded American petition of grievances is thrown to the ground.

Since the 1760s, the British American colonial painters & their subjects, who chose to adopt aspects of ancient looking costumes, were striving for a classic timelessness. Fine artists, thinkers, & artisans, such as Paul Revere, turned to what they understood to be the values of classical Greece & Rome, valuing order, harmony, virtue, balance, & tradition. Portrait painters John Singleton Copley & Henry Benbridge portrayed classical costumes on some of their clients before this depiction by Revere.

By 1772, Charles Willson Peale was painting virtuous mothers in classical gowns holding their innocent children. The props, costumes, and scenery of a portrait declared the values & the attributes by which the subject, and often the artist, wanted to be known. 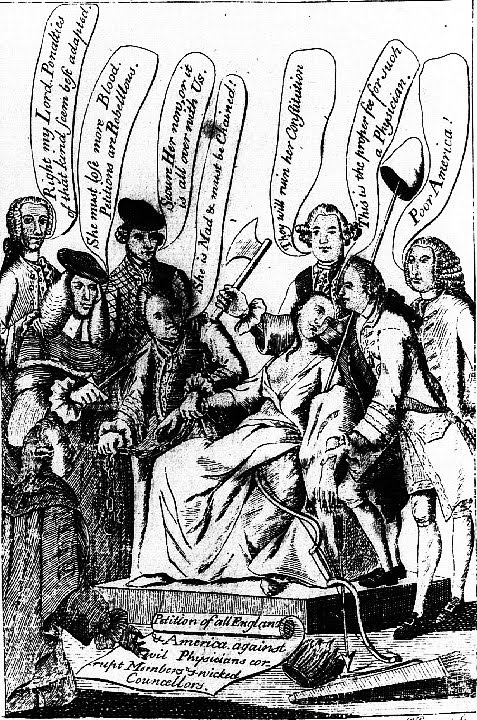 Boston's Paul Revere once again draws America as an Indian woman clothed in a classical costume, with quiver of arrows, a bow, & a feather head dress resting beneath her near a petition declaring "Petition of all England. America against evil Physicians, corrupt Members, & wicked Councellors." Lord North procliams, "She is mad and must be chained!" Behind Lord North lurks a worried Lord Bute, saying: "Secure her now, or it is all over with Us!" A vindictive Lord Mansfield declares, "She must lose more blood. Petitions are rebellious." A compliant Thomas Hutchinson, royal governor of Massachusetts, agrees, "Right, my Lord. Penalties of that kind seem best adapted."
1779 Minerva, or Civic Virtue, W.D. Cooper America Trampling on Oppression from History of North America, E. Newberry. London, 1789, frontispiece.

This English frontispiece depicts a calmer, more controlled, classically dressed America during the middle of the American Revolution accompanied by medals of Benjamin Franklin and George Washington.
1782 America Triumphant and Britannia in Distress, Frontispiece, Weatherwise's Town and Country Almanack.
Below this image an "Explanation" reads:
I. America sitting on that quarter of the globe with the Flag of the United States displayed over her head; holding in one hand the Olive branch, inviting the ships of all nations to partake of her commerce; and in the other hand supporting the Cap of Liberty.
II. Fame proclaiming the joyful news to all the world.
III. Britannia weeping at the loss of the trade of America, attended with an evil genius.
IV. The British flag struck, on her strong Fortresses.
V. French, Spanish, Dutch &c shipping in the harbours of America.
VI. A view of New York wherein is exhibited the Trator Arnold, taken with remorse for selling his country and Judas like hanging himself. 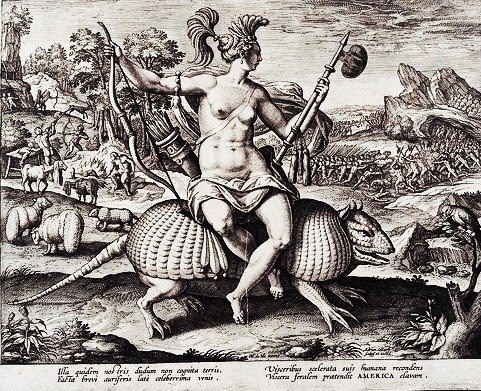 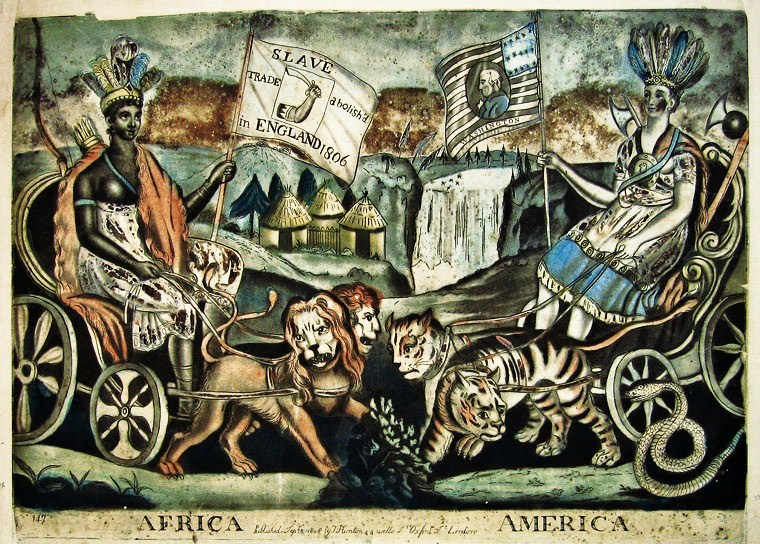 Africa-America, One of a series on the Four Continents. London T. Hinton 1808
Posted by Barbara Wells Sarudy at 4:00 AM