Tea for Parties for Children & Adults, Courting & Marriage in the 18C America 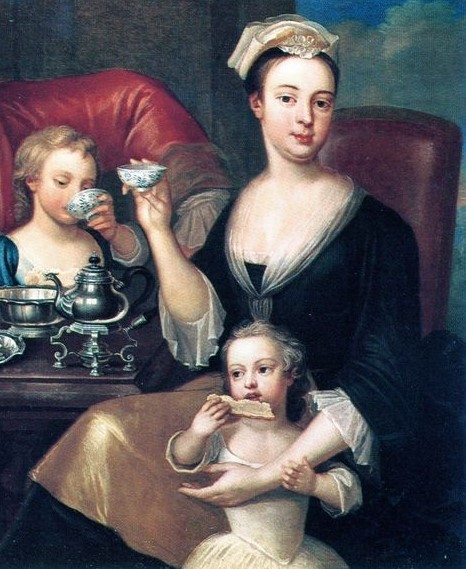 At first the scarcity & expense of the tea, the costly paraphernalia used to serve it, & the leisure considered necessary to consume it, limited the use of tea drinking to the upper classes. Social tea drinking was a prestige custom.

In America, as in England, tea had a rather limited use as a social beverage during the early 1700’s. At this time ale & wine, in contrast to tea, were fairly common drinks. Colonial gentry in Virginia & in the Carolinas a preference was showed for "sober liqueurs," while the common partaking of tea caught on slower in New England.

Of Boston, where he visited in 1740, Joseph Bennett observed that “the ladies here visit, drink tea & indulge every little piece of gentility to the height of the mode & neglect the affairs of their families with as good grace as the finest ladies in London.” (See British lawyer Joseph Bennett's 1740 "History of New England.")

During the 18th century the serving of tea privately in the morning & socially in the afternoon or early evening was an established custom in many households.

In Boston the people “take a great deal of tea in the morning,” have dinner at two o’clock, & “about five o’clock they take more tea, some wine, madeira & punch, ”reported the Baron Cromot du Bourg, Marie Francois Joseph Maxime (1756–1836) during his visit in 1781, when he was Rochambeau's aide from 26 March to 18 November 1781 & left a valuable journal.

Tea seems to have been the excuse for many a social gathering, large or small, formal or informal. And sometimes an invitation to drink tea meant a rather elegant party for both children & adults.

At tea parties, cakes, cold pastries, sweetmeats, preserved fruits, & plates of cracked nuts might also be served, according to Mrs. Anne Grant’s reminiscences of pre-Revolutionary America. . . Sometimes wine & punch were served at teatime, & “in summer,” observed Barbé-Marbois, “they add fruit & other things to drink.”  (See Memoirs of an American Lady: With Sketches of Manners and Scenery in America, as they Existed Previous to the Revolution.)

As the Frenchman Claude Blanchard explained, young men & women enjoyed the sociability of teatime, for it provided an ideal occasion to get acquainted. (See The Journal of Claude Blanchard Commissary of the French Auxiliary Army Sent to the United States During the American Revolution, 1780-1783.)

Tea was not only a beverage of courtship; it also was associated with marriage. Both Peter Kalm, in 1750, & Moreau de St. Méry, in the 1790’s, report the Philadelphia custom of expressing good wishes to a newly married couple by paying them a personal visit soon after the marriage. It was the duty of the bride to serve wine & punch to the callers before noon & tea & wine in the afternoon. 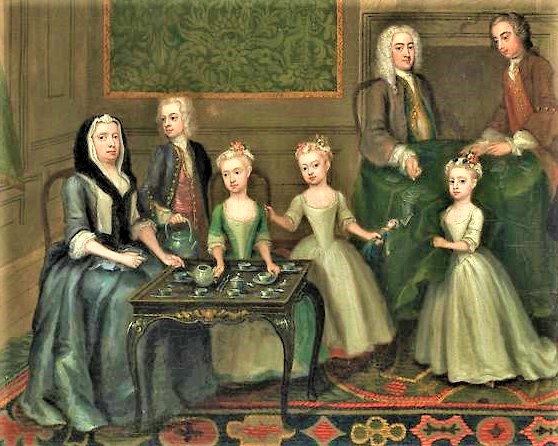 Tea sets were available for children. . . No doubt, make-believe teatime & occasionally real tea drinking were a part of some children’s playtime activities. With grown-up assistance, at least one little girl even got to hold her very own tea party, inviting "20 young misses" "by card 3 days before." The party was lavish, thrown by her mother Nancy when Peggy Livingston was given leave to spend the winter & spring of 1787 in Philadelphia. Peggy, at about the age of five, was allowed to invite 20 girls to her own “Tea Party & Ball.” She “treated them with all good things, & a violin,” wrote her grandfather. There were “5 coaches at ye door at 10 when they departed. I was much amused 2 hours.”

Moreau de St. Méry observed in 1795, during his residence in Philadelphia, that “the whole family is united at tea, to which friends, acquaintances & even strangers are invited.” . . . In the daily routine of activities when the hour for tea arrived, Moreau de St. Méry remarked that “the mistress of the house serves it & passes it around.”

Another late-18th-century diarist, the Marquis de Barbé-Marbois, those present might “seat themselves at a spotless mahogany table, & the eldest daughter of the household or one of the youngest married women makes the tea & gives a cup to each person in the company.”

Throughout the 18th century the most elegant & well-equipped tea table would have displayed a teapot, slop bowl (for tea dregs), container for milk or cream, tea canister, sugar container, tongs, teaspoons, & cups & saucers. These pieces were basic to the tea ceremony, with the addition of a tea urn which came into use during the latter part of the 18th century.

According to Peter Kalm, “when the English women [that is, of English descent] drank tea, they never poured it out of the cup into the saucer to cool it, but drank it as hot as it came from the teapot.” A “dish of tea” was an expression rather than a way of drinking tea in the 18th century. On the table a saucer seems always to have been placed under the cup whether the cup was right side up or upside down.

See: Rodris Roth, Tea Drinking in 18th-Century America: Its Etiquette & Equipage. (Washington, D.C.: Smithsonian Institution, 1961). This excellent book by Rodris Roth that can be found online in its entirety at Project Gutenberg.