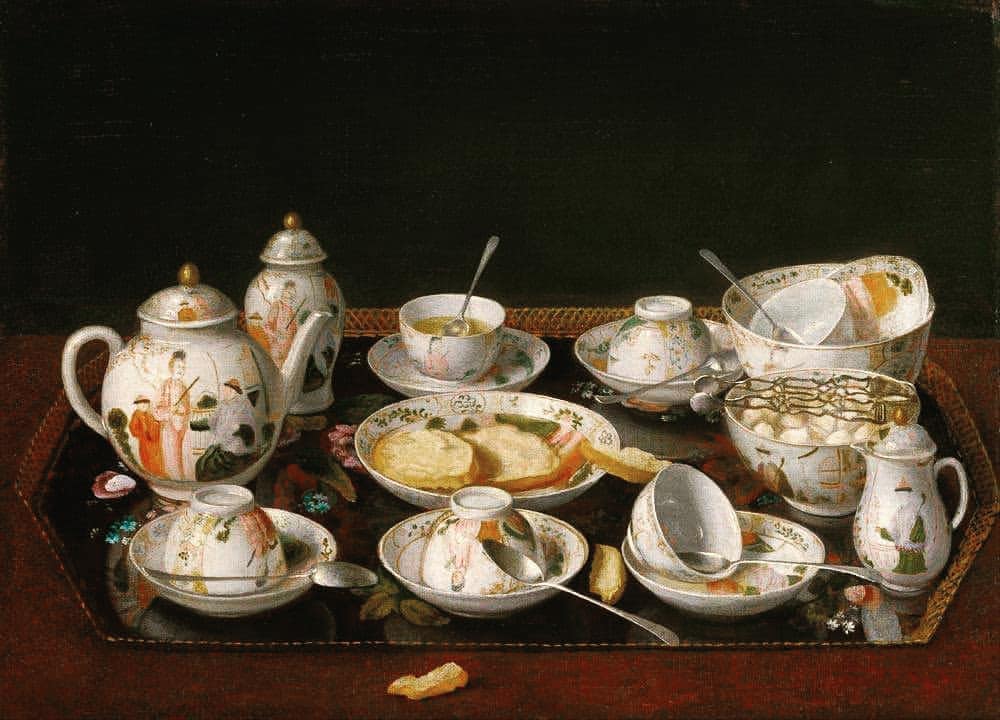 Jean-Etienne Liotard (Swiss artist, 1702-1789) Still Life Tea Set, 1781-83
Beginning in the 1690’s, preparing, serving, & drinking tea was a ceremonial act that was woven into the daily life of the more wealthy British American colonists (& those who aspired to be part of that society.) For colonists who could afford the luxurious tea, much pride was found in performing a dignified tea service on each occasion. Usually, the hostess who prepared & served the tea followed a process that included specific manners & equipment. As accompaniment, the colonists brewed tea with equipment that added to the appraisal of their social status.
A tea canister was used to store the dry tea leaves; these canisters could be bought in sets to match the likes of the other tea equipment & equipage. Some tea canisters had a lid shaped like a sphere to conveniently measure the correct amount of tea to then be poured directly into the teapot. However, caddie spoons & caddie ladles, spoons with short handles & wide bowls, were also used to transfer tea leaves from the canister to the teapot. Each piece, purchased individually or in sets, was needed by a well-mannered hostess to properly serve tea to guests.
The American colonists observed etiquette for the ritual of the tea ceremony. Members of the family, & any guests, would stand or be seated around the tea table, while the mistress of the house would begin the ceremony by measuring out the appropriate amount of dry tea leaves into the tea canister’s lid.
Standing close by, the maidservant held the kettle of hot water that was ready to be poured over the tea leaves once the mistress of the house placed them in the teapot. The teapot containing the hot, brewing tea was then placed atop of a stand or dish to protect the table from the teapot’s heat.
Nearby would be the stand for the kettle to be placed & kept warm until it was needed again to clean the cups or add water to the tea. Along with the teapot & tea cups on the table, there was also a bowl for any tea remnants, a dish for cream or milk, & a bowl for sugar. To show wealth & prestige, additional pieces of equipage would adorn the table.
Tea drinking & tea parties held a significant role in the society of colonial America. Serving tea to one’s guests showed both their politeness & hospitality. In the early 1700’s, tea was more expensive due to its scarceness, & social tea drinking was a luxury of upper class colonists. However, by the mid 1700’s, the East India Company increased the supply of tea to the colonies, decreasing the prices, which allowed more & more people to routinely drink tea.
Visitors were expected to partake in tea drinking to show respect & appreciation for their host’s generosity; refusing a cup of tea was offensive if not done correctly. The socially acceptable way to refrain from accepting a cup of tea when offered was by turning one’s cup upside down on its saucer with its spoon placed across the top.
Tea was also drunk in one’s home in the morning, as well as at social events in the afternoon & evening among both men & women. When tea was served with breakfast, milk was typically not added & instead, the tea would be served with bread & butter. At afternoon teatime, the bread & butter would not appear again. As a major commodity, tea became a staple in the private & social lives of the colonist’s mid-18th century.
See: The Blog Oliver Pluff & Co post Tea as a measure of social status in colonial times
Posted by Darren Hartford on March 1, 2017
https://oliverpluff.com/blogs/news/tea-as-a-measure-of-social-status-in-colonial-times
See: Rodris Roth, Tea Drinking in 18th-Century America: Its Etiquette & Equipage. (Washington, D.C.: Smithsonian Institution, 1961). This excellent book by Rodris Roth that can be found online in its entirety at Project Gutenberg.
Posted by Barbara Wells Sarudy at 4:00 AM