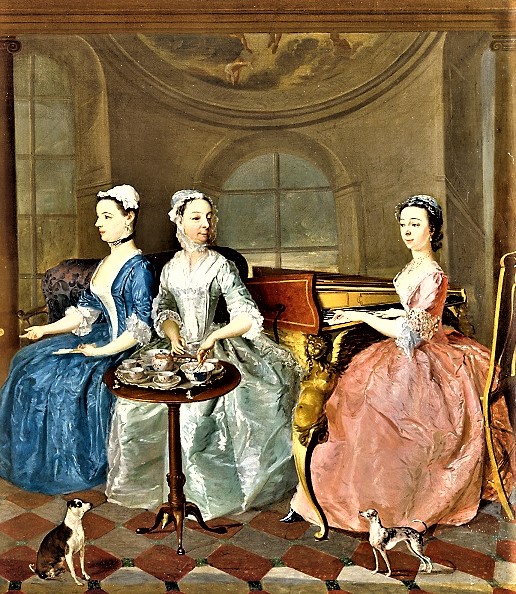 Drinking tea was nearly forsaken in the British American colonies (except for American grown substitutes) during the years of taxation & separation from Britain.  The earliest version of this poem “A Lady’s Adieu to her Tea Table” appeared in the Virginia Gazette, January 20, 1774.

A Lady’s Adieu to Her Tea-Table

Farewell the Tea Board, with its gaudy Equipage,

With Hyson and Congo and best Double Fine. (Types of Tea)

Full many a joyous Moment have I sat by ye,

And the spruce Coxcomb laugh at – maybe – Nothing.

No more shall I dish out the once lov’d Liquor,

Because I’m taught (and I believe it true)

Its Use will fasten slavish Chains upon my Country,

And LIBERTY’s the Goddess I would choose

To reign triumphant in AMERICA.

A similar rhyming version appeared in Massachusetts & other northern colonial newspapers...
A Lady’s Adieu to Her Tea-Table

FAREWELL the Tea-board with your gaudy attire,

Ye cups & ye saucers that I did admire;

To my cream pot & tongs I now bid adieu;

That pleasure’s all fled that I once found in you.

Farewell pretty chest that so lately did shine,

Many a sweet moment by you I have sat,

And the spruce coxcomb laugh at nothing at all,

Only some silly work that might happen to fall.

No more shall my teapot so generous be

In filling the cups with this pernicious tea,

For I’ll fill it with water & drink out the same,

Because I am taught (and believe it is fact)

That our ruin is aimed at in the late act,

Of imposing a duty on all foreign Teas,

Which detestable stuff we can quit when we please.

LIBERTY’S The Goddess that I do adore,

And I’ll maintain her right until my last hour,

Before she shall part I will die in the cause,

For I’ll never be govern’d by tyranny’s laws.