.
Artist Charles Fraser (1782-1760) painted a series of watercolors of churches & meeting houses in South Carolina. He depicts broad swipes of landscapes allowing the viewer to see the buildings in the ground planned around them. These images are from the Carolina Art Association Gibbes Museum of Art, Charleston, South Carolina.

The 1765 church was called "Punkin Hill" locally. The Parish of St. Thomas & St. Dennis was made from the union of the Huguenot Church St. Denis & the Parish of St. Thomas which had been laid off by the Church Act of 1706. In Day on Cooper River it says: “on a high bluff, raising abruptly from the bed of the river, stands the Parish Chapel, commonly known as Pompion Hill Chapel, taking its name from the hill on which it stands.”

Established on the west bank of the Ashley River in 1706, by 1722 the original church had became too small for the parishioners. The church was enlarged in the form of a cross, with a gallery at the west end designated for “people of colour.” Destroyed by fire, it was rebuilt by subscription in 1764, and it covered a great territory. It maintained a Chapel of Ease on James’ Island, which was attended by many Presbyterians on the Island; but, after 1787, the Reverend Thomas Mills states that “the inhabitants of James Island, who were nearly all Presbyterians, or Independents, had procured a minister and organized a Church of their own. After this period, in conformity with the injunctions of the Vestry, my Pastoral duties were generally confined to St. Andrew’s on the main.”

St. James’ Parish, Goose Creek, was laid off in 1706, and the church was completed in 1719. “So numerous was the congregation of this church that its capacity was found in a few years wholly insufficient”, and a Chapel of Ease was erected about 7 miles from the original church structure.

This was St. John’s Colleton, which had been a part of St. Paul’s but was separated from it in 1734, and served “John’s Island, Wadmalaw Island, Edisto Island, and the other adjacent Islands to the seaward.”

The Stony Creek Presbyterian Church built in Indian Land on Stony Creek near Pocotaligo in 1743. Fraser notes in his Reminiscences, even during his boyhood, the Presbyterian "dissenters" never called their places of worship churches.

This is the meeting-house of Bethel Congregation of Pon Pon organized in St. Bartholomew’s Parish in 1728 and first ministered to by the Reverend Archibald Stobo, the Father of Presbyterianism in South Carolina. One historian told of Reverend Robert Baron, sent out to St. Bartholomew’s Parish by the Society for the Propagation of the gospel in 1753: “He arrived at Charles Town June 1st and entered on the duties of his cure on the 7th of that month. Mr. Baron was soon after taken ill, and had a severe seasoning, as it is usually called. His Parishioners were scattered over a great extent of country, and were an orderly and well behaved people. The Presbyterians were numerous, but they all lived together in mutual friendship and Christian charity.”

This parish was often called Sheldon Church because of its proximity to the Bull plantation of that name. “An instance of the hospitality of Carolina, connected with the history of Sheldon Church, has been stated to us b y those who knew the fact. Stephen Bull who live in its vicinity, usually invited as his guests, on the Sabbath, the more respectable part of the Congregation who attended divine service; while his overseer, by his direction, and at his expense, liberally entertained the rest. At that time, seldom less than 60 or 70 carriages, of various descriptions were seen at the Church on the Lord’s Day. It was burnt in 1780 by the British under General Prevost, on their march from Savannah to the siege of CharlesTown.” It was rebuilt on its original lines after the Revolution.

“This part of Colleton County was made a Parish, by an act passed Dec. 18, 1708.” The first missionary, sent by the Society for the Propagation of the Gospel in Foreign Parts was a Reverend Mister Osborn, who arrived in 1713. “His cure was very extensive, and his duty laborious. It was 40 miles long, and 30 wide…He officiated at five different places for the accommodations of his parishioners…Mr. Osborn was greatly esteemed and the Church flourished under his care. This prosperity, however, was soon interrupted. In 1715 the Indian War [Yemassee] broke out and the savages destroyed all the plantations in the Parish…The Missionary with difficulty escaped to Charles Town." By 1760 two brick Chapels of Ease had been built. The Church in this sketch was the Chapel of Pon Pon, which was burnt to the birck walls by the British during the Revolution but rebuilt after the war. The locals then called it "the Burnt Church." 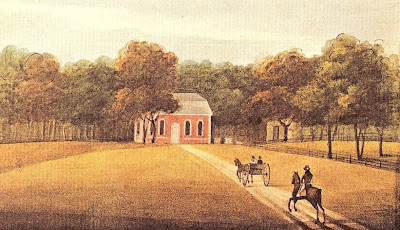 The parsonage stood on a slight hill and its lane led dircectly to the church door. In the woods is a small 1759 vestry building, where Parish business could be transacted and where coachmen & grooms might take shelter.
.
Posted by Barbara Wells Sarudy at 4:00 AM