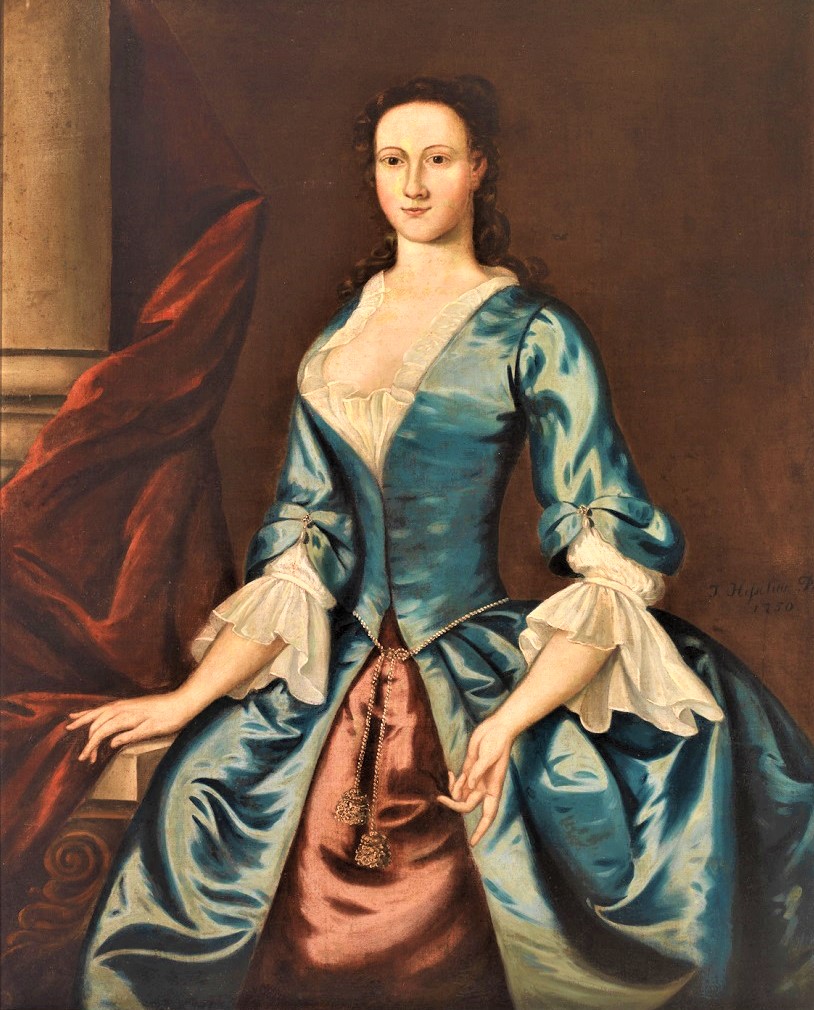 1750 John Hesselius 1728-1778 Millicent Conway Gordon1727-1748 Virginia Museum of History & Culture.
Milicent Agatha Conway (1727-1748) was born in Lancaster, Virginia, her father was Edwin Conway
(1681–1763) & her mother was Anne Ball (1686-1764). She married James Gordon III (1714-1768), who was born in Sheepbridge, Newry, Down, Ireland, on March 28, 1742, in Lancaster, Virginia. They had 4 children during their marriage. She died as a young mother on February 2, 1748, in Lancaster, Virginia, at the age of 21. Milicent Conway Gordon was the 1st wife of James Gordon III & the mother of Ann (Nancy) & Sarah (Sallie) Gordon & babies Agatha & a boy who both died as infants.. She died in 1748 indicating that this is a post-mortem portrait of her. Of the 5 Gordon family portraits painted by Hesselius, this is the only one signed & dated on the front of the canvas.
Here Milicent Agatha Conway is portrayed wearing a blue dress with a red underskirt. She has a gold tasseled cord around her waist & pearls at her elbows. Her right hand rests on a table. Her left hand points downwards. A red curtain is on her right & is wrapped around a column & over the top of the table. John Hesselius signed & dated the painting on the right side of the canvas next to her left elbow. See: Carolyn J. Weekley, Painters & Paintings in the Early American South (2013), 255-256.
The Virginia Museum of History & Culture tells us that the, "Gordon portraits depict the family of an Ulster merchant & planter of Scottish origin who emigrated to Lancaster County in 1738. Through trade with merchants in the British Islands & the West Indies, voracious land purchasing, & active public service, James Gordon quickly rose to prominence, which he celebrated in 1751 by commissioning a sizeable group of large, expensive portraits of himself, his successive wives, his 3 children, & his brother who had emigrated with him. Posed in contemporary clothing before grandiose, artificial settings of an outdated 17C portrait tradition, the sitters seem provincial. The commission for the Gordon portraits seems to have resulted simply from the sudden availability in Virginia in 1751 & 1752 of artists John Hesselius or Robert Feke. Both appeared in the colony at this time..."
Artist John Hesselius (1728-1778) was one of the major American-born artists working in the Middle Colonies & the South in the third quarter of the 18C. The son of Gustavus Hesselius (1682-1755), a Swedish portrait painter who came to America in 1711.  His father was Gustavus Hesselius painted mostly in Maryland & Pennsylvania. John was probably born in Philadelphia. His earliest signed work is dated 1750.  It seems likely that Gustavus Hesselius was John Hesselius’s first instructor. John Hesselius also studied with Robert Feke & his early portraits are stylistically more similar to Feke’s. Hesselius latest signed work dates to 1777.
During his career, Hesselius traveled extensively in Virginia, Maryland, Delaware, Pennsylvania, & possibly in New Jersey. His work seems to have been confined to portraits. All known examples are in oil on canvas, & there is little reason to suspect that he deviated from this practice. He worked exclusively in the late English Baroque & English Rococo traditions of painting, & his style shows the influence of Robert Feke & John Wollaston more strongly than that of his father.
Hesselius married Mary Young Woodward, the widow of Henry Woodward, in 1763, & after that date his energies were divided between his art & the management of his plantation near Annapolis, Maryland. He was also active in the religious affairs of St. Anne’s Parish in Anne Arundel County, Maryland. His interests appear to have been many, & as an artist & landowner he associated with most of the leading citizens of the colony. Hesselius contributed to American painting, & he extended & modified the English tradition of painting in the Colonies.
Posted by Barbara Wells Sarudy at 4:00 AM