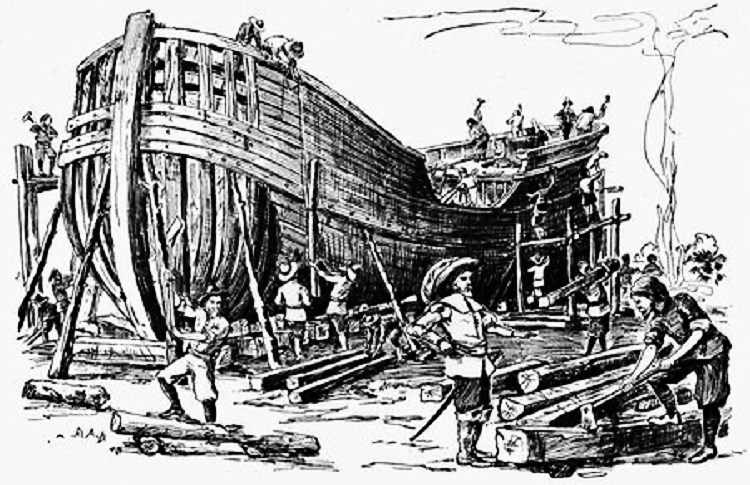 Ships built in the colonies often required free & slave laborers. Naval stores of pitch & resin for tar & turpentine were produced.  Loggers cut sturdy oaks & tall firs for masts & transported them to sawmills. Shipwrights (carpenters) & their assistants used the processed lumber for hulls, keels, & masts.  Hemp was grown for sail-cloth, & ropes were produced.  Blacksmiths made nails & iron fittings for each vessel.  Barrels had to be made from staves, iron hoops, & bungs, before they could be filled to put aboard ship.  In 1769, 389 ships were built in the colonies (1/3 in Massachusetts shipyards).

Many of the North American Dutch & English colonists in the upper colonies of colonial British America preferred to get their slaves from other New World colonies rather than directly from Africa. From the beginning of the African slave trade in the Western Hemisphere, Europe's "New World," in the 16C to its conclusion in the 19C, slave merchants brought the vast majority of enslaved Africans to the Caribbean & Brazil. Of the more than 10 million enslaved Africans to eventually reach the Western Hemisphere, just 388,747—less than 4 percent of the total—came to North America. This was dwarfed by the 1.3 million brought to Spanish Central America, the 4 million brought to British, French, Dutch, & Danish holdings in the Caribbean, & the 4.8 million brought to Brazil.

In the Northern & Middle colonies, direct imports of slaves from Africa were considered by some too dangerous & difficult. Instead, the Northern & Middle colonies often sought their African slaves from Dutch Curacao & later from British Jamaica & Barbados. These slaves were familiar with Western customs & habits of work, qualities highly prized in a region where masters & slaves worked & lived in close proximity. Having survived one climate change already, they also adjusted better to Northern winters, which incapacitated or killed some of those kidnapped directly from Africa. Both causes contributed to the adjective often used to advertise West Indies slaves being sold in the North as "seasoned."

By the late colonial period, the average slave-owning household in New England & the Mid-Atlantic seems to have had about 2 slaves. Estates of 50 or 60 slaves were rare, though they did exist in the Hudson Valley, eastern Connecticut, & the Narragansett region of Rhode Island. But the Northern climate set some barriers to large-scale agricultural slavery. The long winters, which brought no income on Northern farms, made slaves a burden for many months of the year unless they could be hired out to chop wood or tend livestock. In contrast to Southern plantation slavery, Northern slavery tended to be urban.

Slaveholding reflected social as well as economic standing, for in colonial times servants & retainers were visible symbols of rank & distinction. The leading families of Massachusetts & Connecticut used slaves as domestic servants, & in Rhode Island, no prominent household was complete without a large staff of black retainers. New York's rural gentry regarded the possession of black coachmen & footmen as an unmistakable sign of social standing. In Boston, Philadelphia, & New York the mercantile elite kept retinues of household slaves. Their example was followed by tradesmen & small retailers, until most houses of substance had at least one or two domestics.

There is debate among historians about the economic role of Northern slaves. Some maintain that New England slaves generally were held in situations ...without economic justification, working as house servants or valets. Even in Pennsylvania, the mounting Pennsylvania Quaker testimony against slavery in the 1750s & '60s was in large part aimed against the luxuriousness & extravagance of the Friends who had domestic slaves. But other historians ...make a forceful case for slave labor being an integral part of the New England economy.

NB: While the northern states gradually began abolishing slavery by law starting in the 1780s, many northern states did not act against slavery until well into the 19C, & their laws generally provided only for gradual abolition, allowing slave owners to keep their existing slaves & often their children. As a result, New Jersey, for instance, still had thousands of persons legally enslaved in the 1830s, & did not finally abolish slavery by law until 1846. As late as the outbreak of the Civil War, in fact, there were northern slaves listed on the federal census 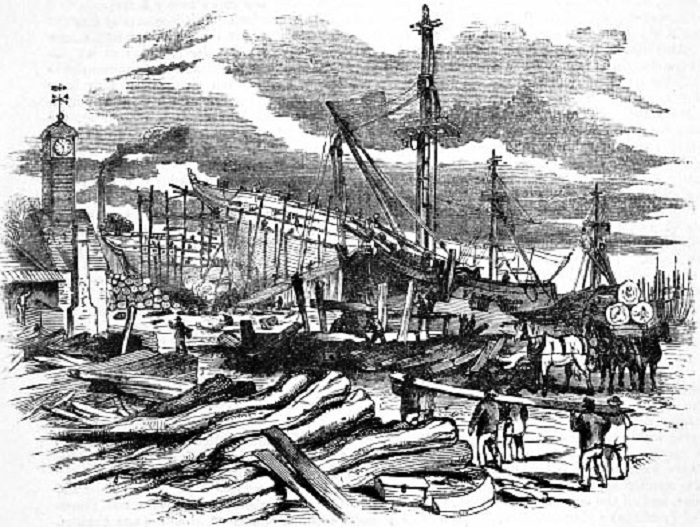