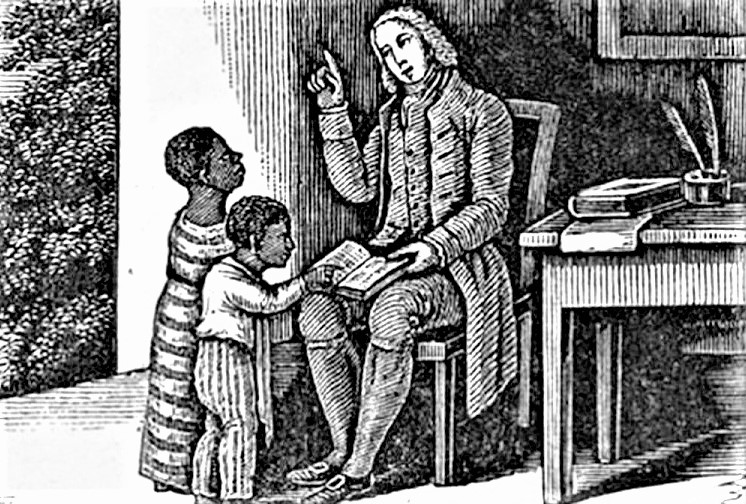 Anthony Benezet (1713-1784) was a Quaker teacher, writer & strong believer in the equality of women & in the abolition of slavery. He was born to a Huguenot (Protestant) family in France. When he was 2 years old, they moved to London to avoid persecution &  then to the British American colonies, when he was 17.

He joined the Religious Society of Friends in Philadelphia & worked to convince other Quakers that slave-owning was against Christian teaching. In 1739, he started as a schoolteacher at Germantown then moved to a position at the Friends' English School of Philadelphia. In 1750, in addition to his daytime work, he set up an evening class for poor black boys & girls, which he ran from his own home.

In 1754, he left the Friends' English School to set up the first public girls' school in America. He also continued to teach African American children from home until 1770 when, with the support of the Society of Friends, he set up a school for them at Philadelphia.

From the 1750s, Benezet dedicated his life to fight for human rights & equality. He felt not supporting the equality of all people contradicted Christianity & lessened a person's humanity. He wrote: "To live in ease & plenty by the toil of those whom violence & cruelty have put in our power, is neither consistent with Christianity nor common justice..."

Although living in colonial British America, his influence on the England's equal rights movement was great. He campaigned for the Quaker Headquarters in London to strongly support human rights & equality, & he produced, at his own expense, a number of anti-slavery tracts & pamphlets. His pamphlet, 'Some Historical Account of Guinea', written in 1772, was read by John Wesley &  his appeals to the British legal system, to show that slavery was contrary to the founding laws of the empire, also influenced Granville Sharp. Both men corresponded with Benezet & distributed his works in England. He even wrote to Queen Charlotte in 1783, encouraging her to consider the plight of the enslaved & the "divine displeasure" that may occur to the nation that promotes such injustice.

Anthony Benezet died at Philadelphia on May 3, 1784. He left money to continue his teaching work with black boys & girls & to fight for equality & justice.
Posted by Barbara Wells Sarudy at 4:00 AM