by Benjamin Franklin Posted on January 13, 1737 The Pennsylvania Gazette  There was a similar list published in the New England Weekly Journal of July 6, 1736.

Nothing more like a Fool than a drunken Man.  Poor Richard.

A
He is Addled,
He’s casting up his Accounts,
He’s Afflicted,
He’s in his Airs.

B
He’s Biggy,
Bewitch’d,
Block and Block,
Boozy,
Bowz’d,
Been at Barbadoes,
Piss’d in the Brook,
Drunk as a Wheel-Barrow,
Burdock’d,
Buskey,
Buzzey,
Has Stole a Manchet out of the Brewer’s Basket,
His Head is full of Bees,
Has been in the Bibbing Plot,
Has drank more than he has bled,
He’s Bungey,
As Drunk as a Beggar,
He sees the Bears,
He’s kiss’d black Betty,
He’s had a Thump over the Head with Sampson’s Jawbone,
He’s Bridgey.

England 1730 A Club of Gentlemen by Joseph Highmore (English painter, 1692-1780)  Note:
Since 1633, a round of drinks has meant “a quantity of liquor served to a company at one time;” probably because it was customary for gentlemen to drink at these round tables in a circle facing one another.

C
He’s Cat,
Cagrin’d,
Capable,
Cramp’d,
Cherubimical,
Cherry Merry,
Wamble Crop’d,
Crack’d,
Concern’d,
Half Way to Concord,
Has taken a Chirriping-Glass,
Got Corns in his Head,
A Cup to much,
Coguy,
Copey,
He’s heat his Copper,
He’s Crocus,
Catch’d,
He cuts his Capers,
He’s been in the Cellar,
He’s in his Cups,
Non Compos,
Cock’d,
Curv’d,
Cut,
Chipper,
Chickery,
Loaded his Cart,
He’s been too free with the Creature,
Sir Richard has taken off his Considering Cap,
He’s Chap-fallen,

E
He’s Prince Eugene,
Enter’d,
Wet both Eyes,
Cock Ey’d,
Got the Pole Evil,
Got a brass Eye,
Made an Example,
He’s Eat a Toad & half for Breakfast.
In his Element,

F
He’s Fishey,
Fox’d,
Fuddled,
Sore Footed,
Frozen,
Well in for’t,
Owes no Man a Farthing,
Fears no Man,
Crump Footed,
Been to France,
Flush’d,
Froze his Mouth,
Fetter’d,
Been to a Funeral,
His Flag is out,
Fuzl’d,
Spoke with his Friend,
Been at an Indian Feast.

G
He’s Glad,
Groatable,
Gold-headed,
Glaiz’d,
Generous,
Booz’d the Gage,
As Dizzy as a Goose,
Been before George,
Got the Gout,
Had a Kick in the Guts,
Been with Sir John Goa,
Been at Geneva,
Globular,
Got the Glanders.

H
Half and Half,
Hardy,
Top Heavy,
Got by the Head,
Hiddey,
Got on his little Hat,
Hammerish,
Loose in the Hilts,
Knows not the way Home,
Got the Hornson,
Haunted with Evil Spirits,
Has Taken Hippocrates grand Elixir,

K
He’s a King,
Clips the King’s English,
Seen the French King,
The King is his Cousin,
Got Kib’d Heels,
Knapt,
Het his Kettle.

P
He drank till he gave up his Half-Penny,
Pidgeon Ey’d,
Pungey,
Priddy,
As good conditioned as a Puppy,
Has scalt his Head Pan,
Been among the Philistines,
In his Prosperity,
He’s been among the Philippians,
He’s contending with Pharaoh,
Wasted his Paunch,
He’s Polite,
Eat a Pudding Bagg,

R
He’s Rocky,
Raddled,
Rich,
Religious,
Lost his Rudder,
Ragged,
Rais’d,
Been too free with Sir Richard,
Like a Rat in Trouble.

S
He’s Stitch’d,
Seafaring,
In the Sudds,
Strong,
Been in the Sun,
As Drunk as David’s Sow,
Swampt,
His Skin is full,
He’s Steady,
He’s Stiff,
He’s burnt his Shoulder,
He’s got his Top Gallant Sails out,
Seen the yellow Star,
As Stiff as a Ring-bolt,
Half Seas over,
His Shoe pinches him,
Staggerish,
It is Star-light with him,
He carries too much Sail,
Stew’d
Stubb’d,
Soak’d,
Soft,
Been too free with Sir John Strawberry,
He’s right before the Wind with all his Studding Sails out,
Has Sold his Senses.

V
He makes Virginia Fence,
Valiant,
Got the Indian Vapours, 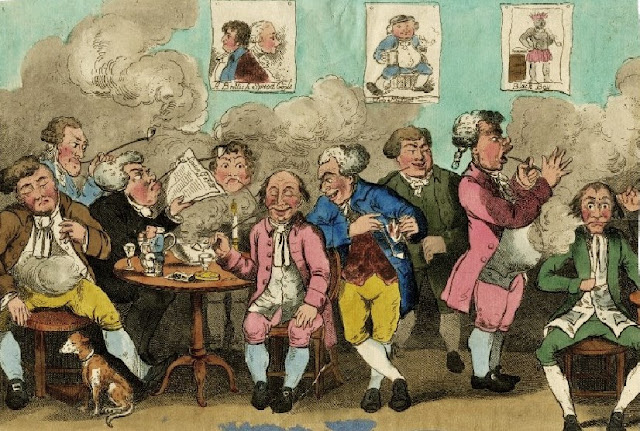 W
The Malt is above the Water,
He’s Wise,
He’s Wet,
He’s been to the Salt Water,
He’s Water-soaken,
He’s very Weary,
Out of the Way.

The Phrases in this Dictionary are not (like most of our Terms of Art) borrow’d from Foreign Languages, neither are they collected from the Writings of the Learned in our own, but gather’d wholly from the modern Tavern-Conversation of Tiplers.
The Pennsylvania Gazette, January 13, 1736/7