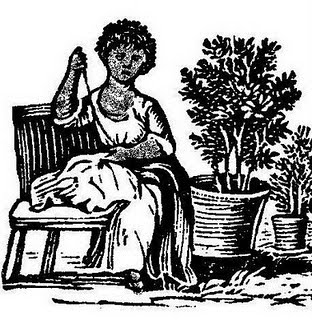 .
An unusual number of the slave seamstresses and house slaves appearing in Virginia runaway notices, were mulatto. The seamstresses had a variety of skills; while all were seamstresses, some were also described as being able to spin, weave, wash, and iron. Slaves, who were children of the master or his male relatives, were often raised to work in the house, closer to the family. Perhaps they were more likely to run away, because there was at least a chance that they could pass as white.

Below are slave notices for runaway seamstresses from a survey of most 18th century Virginia newspapers.

Virginia Gazette (Hunter), Williamsburg, October 27, 1752.
RAN away...a fair Mulatto Woman Slave, named Moll, about 22 Years of Age, and 5 Feet high, with brown Hair, grey Eyes, very large Breasts and Limbs two of her upper fore Teeth are rotten and broken off...she is a very sly subtle Wench and a great Lyar; she is very handy about waiting and tending in a House, and can wash, iron and sew coarse Work. It's likely she may change her Name, pass for a free Woman and hire herself...

Virginia Gazette (Purdie & Dixon), Williamsburg, September 8, 1768.
RUN away...a bright mulatto wench called LUCY... She sews and irons well, is about 35 years old, has two moles on one side of her nose, three of her fingers on one hand contracted by a burn when young, and a large scar on one of her elbows...

Virginia Gazette (Purdie & Dixon), Williamsburg, October 20, 1768.
RUN away...a bright mulatto wench named JUDE, about 30 years old, is very remarkable, has lost one eye, but which I have forgot, has long black hair, a large scar on one of her elbows, and several other scars in her face...I have great reason to think she will pass for a free woman, and endeavour to make into South Carolina. She is very knowing about house business, can spin, weave, sew, and iron, well...

Virginia Gazette (Purdie & Dixon), Williamsburg, May 6, 1773.
RUN away...a Country born Negro Woman named SARAH, a very lusty stout made Wench, about two and twenty Years of age, very artful, and, though not a Mulatto, may attempt to pass for a free Woman...She has been chiefly a House Servant, is a fine Sempstress, Knitter, Washer, and Ironer...

...reward for taking up and delivering PATTY, a lightish coloured negro woman, pitted with the small pox, about 30 years of age, walks well, and generally fast, is rather above the middle size, well shaped, a good sempstress...

Virginia Gazette (Purdie), Williamsburg, August 8, 1777.
RUN away...a mulatto girl named KATE, or Catharine, about 5 feet high, has been brought up in the house from her infancy, and can work well with a needle. She is 19 or 20 years of age, has a smiling countenance when spoke to, and at some times is rather impertinent...

Virginia Journal and Alexandria Advertiser (Richards), Alexandria, October 21, 1784.
RAN away...CATE, a light Mulatto, about 22 years of age, about 5 feet high, full faced, expressive eyes, of a pleasant countenance, an high forehead, fine teeth, bushy long hair, is well set, and broad shouldered...She is very handy, spins well, and has been used to both house and plantation work. SINAH, about 20 years of age, rather of a darker complexion than Cate, has a sunken bumpy face, a very unbidding look, has a decay and holes in two of her upper foreteeth, a sulky illnatured countenance, well shaped, of the middle size, low forehead, and very bushy long hair...She has been brought up in the house, is a good seamstress, and spins well...

Virginia Journal and Alexandria Advertiser (Richards), Alexandria, September 29, 1785.
RAN AWAY...a MULATTO WOMAN, named MOLLY; of a middle size...As she can read, and is handy at her needle, it is probable she will endeavour to pass for a free woman. She is very artful, and capable of inventing a falsehood...

Virginia Independent Chronicle (Davis), Richmond, July 9, 1788.
RUN-AWAY ...a likely MULATTO WOMAN, called RACHEL; about 25 years of age, 5 feet 2 or 3 inches high, thin visage, long black hair, stoops in the shoulders, and has a scar (not very visible) on her chin, occasioned by the kick of a horse when a child. She is an excellent sempstress, and it is probable will pass (from being uncommonly white) for a free woman, unless closely observed...

Virginia Independent Chronicle (Davis), Richmond, March 13, 1790
.... a low, black, well set wench for a wife, the property of a Mr. James Toolers of Charles City, the wench is a decent house servant, can sew and wash very well

Virginia Gazette and General Advertiser (Davis), Richmond, January 26, 1791
....She is about 40 years of age, and rather above the common stature, has a scar upon the back of her neck, and is a pretty good sempstress...

Virginia Gazette and General Advertiser (Davis), Richmond, January 18, 1792.
Committed to the jail of this county...a runaway negro wench who calls herself JAMIMAH, and says she belongs to a Mr. Robert Thompson of Louisa county. She appears to be about twenty years of age, very likely in person, above the middle size, strong, straight, of a very healthy and vigorous carriage, and remarkably handy in a family. She can sew plain work very well, is of a kind, obliging, obedient, soft disposition, with many marks on her back of having been severely and cruelly whipped indeed.

Norfolk Herald (Willett and O'Connor), Norfolk, May 13, 1797
....SLAVES left my residence...JAMES, A Mullato Man, about 30 years of age, ...The other slave is a dark mulatto woman called KESIAH, Wife to the above described man. She is a thin delicately formed woman, rather small, has short hair, with several grey bunches just appearing from under her cap on the from part of her head---her teeth before are decayed---She is much addicted to smoking tobacco, and is a great drunkard---She is between 30 and 40 years of age...Both these people have been bred to domestic capacities; the man is a house servant and to wait on a gentleman when travelling; the woman a lady's maid, and an excellent sempstress...

Alexandria Advertiser and Commercial Intelligencer (S. Snowden & Co.), Alexandria, May 7, 1802
....Ran Away...Patty, a likely Negro wench, about twenty years of age: she has been brought up in the house, is a good seamstress, & very capable...

Norfolk Herald (Willett and O'Connor), Norfolk, June 28, 1803
...eloped from me in August last. LUCY is about 40 years of age; rather spare made, has large eyes, and of a dark tawney complexion; I am told she can read, and perhaps write a little. She is an excellent seamstress, nurse &c...
Posted by Barbara Wells Sarudy at 4:00 AM