When former slave Catherine Ferguson, a New York City woman devoted to Christian education & the care of orphans, died in 1854, her death prompted this obituary written by Lewis Tappan, an eminent evangelical antislavery activist.  He tells of a child born a slave, whose mother was sold away by their New York master.   When she is finally freed, she devotes her long life to serving the Lord and to caring for neglected children. Tappan also claimed, that she was the first person to have founded a Sunday school in New York City. 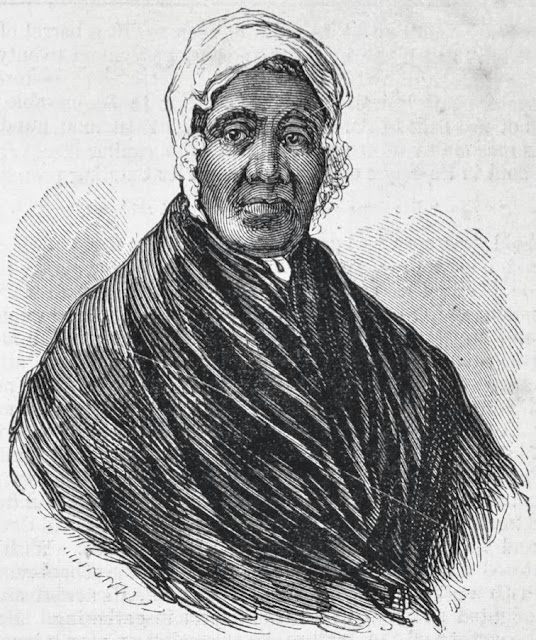 "Died, on Tuesday, 11th instant, at her house, 74 Thompson street, Widow Catharine Ferguson, after a brief illness, aged about 80 years.

"The departure of this remarkable woman should be commemorated by an obituary notice worthy of such a mother in Israel, and such an active, life-long, Christian philanthropist. It is hoped that a memoir will be presented to the public. Thousands in this community have heard of or known Katy Ferguson, the aged colored woman, who, in more vigorous life was the celebrated cake-maker for weddings and other social parties. But many who have eaten her unrivalled cake, and been edified by her sensible chat or pious discourse, may be ignorant of the eminent virtues and extraordinary good deeds which crowned her life. It is due, therefore, to the cause of Christ, of philanthropy, and the people of color especially, that her distinguished services should be recorded. The facts contained in this notice were taken down from Mrs. Ferguson’s own lips, March 25, 1850.

"Katy was born a slave. Her mother gave birth to her on her passage from Virginia to this city. Katy Williams—for that was her name—was “owned” by R. B., who lived on Water street, and was an elder in one of the New-York City Presbyterian Churches. “R. B.,” said Katy, “sold my mother away, but I remember that before we were torn asunder, she knelt down, laid her hand on my head, and gave me to God.”

"Katy never saw her mother again. Her mistress told her that if she was as good as her mother, she would do well. Katy felt keenly the loss of her mother. The recollection of her own anguish when separated from her, made her, she said, feel compassion for children. When ten years old, she told her master, R. B., that if he would give her her liberty, she would serve the Lord for ever. But he did not do it.

"Katy was never taught to read. “My mistress,” she said, “would not let me learn; and once she said to me, ‘You know more now than my daughters.’” One of her mistress’ sons asked Katy to teach him geography, etc. She exclaimed, “I can’t!” He replied, “Yes, you can; if I don’t read right in the Bible, or if I don’t say my catechism right, you tell quick enough.”

"At fourteen years of age she was converted to God. When under conviction of sin she determined to go and see the Rev. John M. Mason, whose church she then attended. She was afraid to go, was unwilling it should be known in the family that she went, and tremblingly apprehensive that she could not get access to Dr. Mason, or that he would not pay attention to her. She, however, summoned resolution enough to go. “While I stood at the door ringing the bell,” said she, “I can not describe my feelings; and when the door opened, and Dr. Mason himself stood before me, I trembled from head to foot. If he had spoken harshly to me, or had repulsed me, I should almost died of grief, and perhaps have lost my soul.” But the good man did not speak harshly to her, nor repulse her. Stern and apparently haughty as he was on some occasions, yet he possessed kind and tender feelings, as the writer well remembers. He united two qualities that are never found united, except in truly great men, high intellectual power and strong emotional feelings. Without waiting for the little trembling colored girl to say any thing, Dr. Mason said, “Have you come here to talk to me about your soul?” This greatly encouraged her. She went in and disclosed to the venerable man the secrets of her heart.

"When Katy was sixteen or seventeen years old, a lady in the city purchased her freedom for $200, giving her six years to reimburse her; but she afterwards agreed to allow her one half of the sum for eleven months’ work, and the late excellent Divie Bethune raised the other hundred dollars.

"At eighteen she was married. She had two children, but lost them both. “They are dead,” said Katy, “and I have no relations now, and most of my old friends are gone.”

"During her life, she had taken forty-eight children—twenty of them white children—some from the alms-house and others from their parents, and brought them up, or kept them till she could find places for them. She expended much money on their behalf and followed them with affectionate interest with her prayers. To my inquiry, “Have you laid up any property?” she quickly replied, “How could I, when I gave away all I earned?”

"When she lived at 51 Warren street, (the house has since been taken down,) she regularly collected the children in the neighborhood, who were accustomed to run in the street on the Lord’s day, into her house, and got suitable persons to come and hear them say their catechism, etc.

"The sainted Isabella Graham used to invite Katy’s scholars to her house, to say their catechism, and receive religious instruction. This was about the time Dr. Mason’s Church in Murray street was built. The doctor heard of her school, and one Sunday visited it. “What are you about here, Katy,” said he; “keeping school on the Sabbath? We must not leave you to do all this.” So he spoke to his elders, had the lecture-room opened, and the children transferred to it. This was the origin of the Sunday-school in the Murray street church, and it is believed that Katy Ferguson’s was the first Sunday-school in the city.

"For more than forty years, up to the last of life, she has had a prayer-meeting at her house every Friday evening, and for some five years past another every Sabbath afternoon, into which she gathered the poor neglected children of the neighborhood, and those adults who did not attend church anywhere. She always secured the aid of some good man to conduct these meetings. The results of these efforts were most happy. Tract distributors, city missionaries and others remarked that where Katy lived, the whole aspect of the neighborhood was changed. So much for the exertions of a poor colored woman, who could not read! “The liberal heart deviseth liberal things.”

"The secret of Katy’s usefulness was her fervent, uniform, and consistent piety. No one could be with her, even for a little while, without feeling its influence. The love of God was shed abroad in her heart, and it found expression in acts of benevolence to his children.

"The cause of missions was very dear to her. Three years and a half ago a company of missionaries were about to embark for West-Africa, under the direction of the American Missionary Association. One of the missionaries was invited to attend the little meetings held at Katy’s house, and did so once or twice before leaving the country. Katy’s sympathies were at once strongly enlisted in behalf of this young missionary and all his associates. A few months since, the writer met her in the street, and she eagerly inquired about the Mendi Mission. “For these three years,” said she, “I have never missed a day but I have prayed for those dear missionaries.”

"Katy mourned over the condition of the poor people in the city, who were suffering on account of their vices as well as their poverty. She said: “The ruination of both white and colored people, in this city, is gambling. I told one of them, that I would never do it; that I had rather live on bread and water.”

"On Tuesday morning, having been for several days somewhat indisposed, she went out to see a physician. She soon returned to her house and lay down, but grew rapidly worse. In a few hours, it became apparent that her disease was cholera, and she was sensible that the hour of dissolution was at hand. Notwithstanding the suddenness of the summons, she was ready. Her mind was calm and clear. “Oh!” said she to a friend who stood near, “what a good thing it is to have a hope in Jesus!” Her last words were: “All is well.” Yes, sainted spirit, “all is well.”
Posted by Barbara Wells Sarudy at 4:00 AM