From the Fields - Flax & Hemp to Homespun - Revolutionary Resistance through Homespun 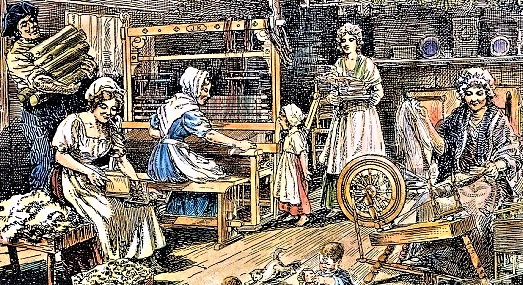 Made in America: Revolutionary Resistance through Homespun & the Rise of American Textile Manufacturing

As tensions rose between the American Colonies & Great Britain in the late 1760s, some Virginians displayed their defiance to the Crown in their choice of garments fashioned from locally made fabrics. Homespun — or locally produced textiles — announced the political leanings of the wearer. These homespun textiles also became a necessity once trade with England ended in 1774 & Virginia & other Colonies were faced with meeting the textile demand through local production.

As early as the 17th century, Colonists began to process & weave their own fabrics, & “homespun” came to define any textiles produced domestically in a nonindustrial setting. Raw materials such as linen, cotton, wool, hemp & even silk were transformed into fabrics in North America for local consumption. Most of these homespun textiles would be used as household linens, bed curtains &, on occasion, even for clothing.

Textiles made up the single largest import from England during the 17th & 18th centuries. In theory, the American Colonies produced raw materials & exported them to England. In return, they received finished goods. A series of Navigation Acts — English laws dictating that the Colonies could receive European goods only from England — helped to codify this system.

From the fine & fancy to the plain & everyday, the English goods were better quality & could be purchased at competitive or cheaper prices. Most Colonists bought imported English textiles & used them not only within their homes but also for their clothing.

In the spring of 1769, political debates over taxation raged throughout Virginia. The recently repealed Stamp Act, which had imposed a tax on every piece of paper the Colonists used, remained fresh in many minds. The newly passed Townshend Acts placed a set of taxes on imported glass, lead, paints, paper & tea. In May of that year, Virginia’s House of Burgesses passed a resolution that directly challenged Parliament’s right to tax Virginians. In retaliation, Norborne Berkeley, Baron de Botetourt, who had been appointed Virginia’s royal governor only a few months before, formally dissolved the governing body.

A day later, the burgesses met at the Raleigh Tavern in Williamsburg & formed the Virginia Association, which called on Virginians to “promote & encourage industry & frugality, & discourage all manner of luxury & extravagance.” Starting Sept. 1, 1769, those who signed the agreement would no longer import listed goods from England, including many textiles such as linens, wools, cottons & silks above a certain price. It even suggested that sheep should not be slaughtered & instead should be kept for their wool. As other Colonies adopted associations, they shared Virginia’s logic that nonimportation & increasing domestic production would put pressure on the English economy & that British merchants & producers would beg Parliament to repeal all of the taxes on the American Colonies.

Men & women throughout Virginia worked steadily to increase domestic production & took pride in wearing homespun. Martha Jacquelin in York County, Virginia, wrote to her London agent in August 1769, “You’ll see by my invoice that I am an Associator … But believe me, our poor country never stood in more need of an Effort to save her from ruin than now, not more from taxes & want of Trayd (sic) than from our own extravagances … I expect to be dressed in Virginia cloth very soon.” Virginia cloth, another term for domestically made textiles, became a fashionable way to show frugality & prove that Virginians did not need to rely upon English imported fabrics.

In December 1769, the House of Burgesses decided to host Lord Botetourt at a ball in the Capitol, only six months after he dismissed the governing body. The day after the event, The Virginia Gazette reported that the “same patriotic spirit which gave rise to the associations of the Gentlemen … was most agreeably manifested in the dress of the ladies.” More than 100 women appeared at the Capitol wearing homespun gowns. The quality of the fabric & where they acquired the quantity needed for the gowns remains unknown. The Gazette wished “that all assemblies of American Ladies would exhibit a like example of public virtue & private economy, so amiably united.”

In the remaining years leading up to the outbreak of the Revolutionary War, more associations were signed or strengthened to keep economic pressure on the English. The Eastern Seaboard continued to produce textiles at a rapid rate. The Derby Mercury in Ireland, which was a center of the linen trade, reported in 1770 that the city of Lancaster, Pennsylvania, maintained no less than 50 looms & 7,000 spinning wheels, producing more than 30,000 yards of linens & woolens a year.

Homespun fabric even became a political statement for Americans visiting England. Edmund Jenings, a Virginia-born lawyer who lived in London, wrote a letter to Richard Henry Lee informing him of his new clothing. He wrote, “Your brother has given me cloth made in your family I wear it on all occasions to show the politicians of this country that the sheep of America have not hair on their backs. — They can hardly believe their eyes.”

On Dec. 1, 1774, the final nonimportation agreement took effect when signed by the first Continental Congress. The Colonies would not import any goods, including textiles, from Great Britain. Virginians along with the other 12 American Colonies would need to produce all the textiles for their households & apparel, a nearly impossible task.

The outbreak of war in April 1775 would create an even larger problem: clothing & equipping an infant army & navy.

The military needed enormous amounts of textiles for clothing, tents, knapsacks, haversacks & blankets. Initially, tens of thousands of yards of fabric arrived in storehouses across the Colonies, including both pieces bought before the nonimportation agreements & homespun woven in homes, farms & plantations. These materials were quickly depleted, & more were immediately needed. With no imports coming from Great Britain & domestic production not meeting the demand, the American army faced major supply shortages.

The Continental Congress sought help to get materials, especially textiles, for its newly established military force. Emissaries traveled to Spain & Holland & gained some initial support. Dressed in a very plain manner with a pine marten fur cap, Benjamin Franklin visited the court of France. The French Court admired Franklin & his unique American dress, which they may have believed was homespun. Franklin secured the Treaty of Alliance between the newly formed United States of America & the French that allowed much needed supplies to flow into the United States.

With the signing of the Treaty of Paris in 1783 & the end of the American Revolution, American merchants quickly resumed trading with England. Once again it was cheaper to import high-quality textiles than to establish the industry in the new republic. Still, Americans continued to produce homespun fabrics to supplement the imported textiles they purchased from England. The textile industry began to slowly establish itself, especially in the New England states.

When George Washington was unanimously elected president, he began to carefully craft what he would wear at his inauguration. After seeing an advertisement in a New York newspaper for American-made broadcloths (a heavily fulled or napped wool), he contacted his friend, Gen. Henry Knox. On Jan. 29, 1789, Washington wrote, “I have ventured to trouble you with the Commission of purchasing enough [broadcloth] to make me a suit of Cloaths. As to the colour, I shall leave it altogether to your taste; only observing, that, if the dye should not appear to be well fixed, & clear, or if the cloth should not really be very fine, then (in my Judgment) some colour mixed in grain might be preferable to an indifferent [stained] dye. I shall have occasion to trouble you for nothing but the cloth & twist to make the button holes.”

On April 30, 1789, Washington became the first president of the United States. He wore a brown broadcloth three-piece suit made from fabric woven at the Hartford Woolen Manufactory, a newly established business in Connecticut. In October of that same year, Washington visited the factory & wrote in his diary, “I viewed the Woolen Manufactury at this place which seems to be going on with Spirit. There (sic) Broadcloths are not of the first quality, as yet, but they are good; as are their Coatings, Cassimers, Serges & everlastings. Of the first that is broad-cloth I ordered a suit to be sent to me at New York & of the latter a whole piece to make breeches for my servants.”

By choosing an American-produced broadcloth for his first inaugural suit, Washington supported the economic growth & industrial establishment within the newly established United States. In the 19th century, an American textile industry would blossom.

See Colonial Williamsburg here.  Neal Hurst is the Foundation’s associate curator for costume and textiles. He also spent 7 years in the Historic Area earning his journeyman status as a tailor.