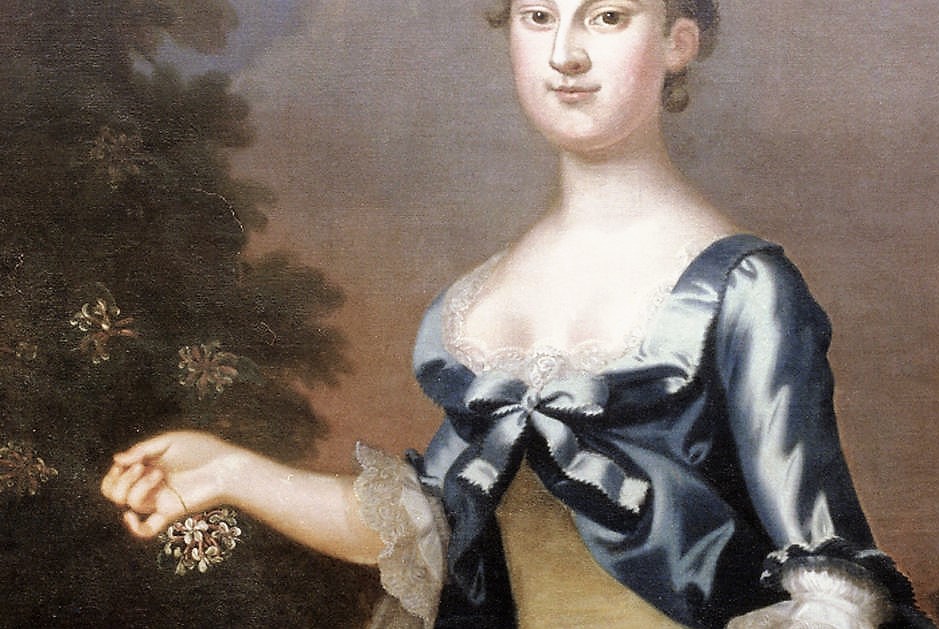 Life for Martha Washington at Mount Vernon Before the Presidency

At Mount Vernon, Martha Dandridge Custis Washington's (1731-1802) responsibility was the household. Although he was often traveling out of Virginia, when he was at home, George would mount his horse each day & make the rounds of his various fields & farms, as Martha would make her daily circuit from the main house to the kitchen, storeroom, poultry yard, wash-house, smokehouse, & garden.

In 1757, the widow Martha came to Mount Vernon along with 12 household slaves from the Custis estate of her 1st husband. These slaves included 2 men who acted as table servants; a man & a woman who looked after the children; 2 female cooks; 2 female washerwomen; a female spinner & a female seamstress; & 2 women who served as maids for Martha & her daughter. These African American slaves & other white servants actually performed what Martha called the “Drudgery duties,” the actual physical labor necessary to keep the enterprise running.*

Martha managed & supervised the entire operation. Each day she assigned chores to the slaves & servants, inspected the quality of their work, & made sure their tasks were completed in a timely fashion. The Washingtons often entertained guests for dinner or hosted overnight visitors. Both Martha & her staff had to respond to the additional burdens of hospitality, sometimes instantaneously as a traveler would arrive unexpectedly at the door.

Although Martha was responsible for creating the day’s menu, slave cooks actually prepared the various meats, puddings, pickles, cakes, & pastries served at meals. Martha used a handwritten collection of recipes she had inherited from the family of her late 1st husband. She also consulted cookbooks available at the time, including Hannah Glasse’s Art of Cookery. The vast majority of slaves could not read, so it is likely that Martha read her recipes aloud to them until they had them memorized. Martha also supervised the process of curing meats. She was particularly proud of her prowess at producing high-quality smoked hams. In her garden, she experimented with growing new fruits & vegetables to expand & diversify the plantation diet.

Reportedly, Martha’s favorite household task was needlework. In the 18C, fine needlework was regarded as a sign of feminine accomplishment & gentility. Mount Vernon’s female slaves performed the more mundane tasks, such as spinning thread & weaving cloth. They also made the coarse clothing worn by plantation slaves. Martha, however, spent some time almost every day engaged in fine needlework. Such sewing, mending, knitting, & embroidering involved a high level of attention to detail & high-level of expertise. Martha enjoyed sewing with her daughter, granddaughters, friends, & female slaves. She could, however, be highly critical of those whose precision, with the needle did not meet her exacting standards. Although a warm & loving person, she came to Mount Vernon with strong expectations & standards.

At the time that George & Martha Washington began to farm in earnest eastern Virginia had been settled for 152 years. Yet the population was almost wholly rural. Williamsburg, the Virginia capital, was hardly more than a country village, & Norfolk, the Virginia metropolis, probably did not contain more than 5,000 inhabitants. The population generally was so scattered that, as has been remarked, a man could not see his neighbor without a telescope or be heard by him without firing a gun.

A large part of the settled land was divided up into great estates, though there were many small farms. The Virginia plantation of 1760 was much more sufficient unto itself than similar plantations of the next century. A son of George Mason, Washington's close friend & neighbor, penned the following description of industry at Gunston Hall: "My father had among his slaves carpenters, coopers, sawyers, blacksmiths, tanners, curriers, shoemakers, spinners, weavers, & knitters, & even a distiller. His woods furnished timber & plank for the carpenters & coopers, & charcoal for the blacksmith; his cattle killed for his own consumption & for sale, supplied skins for the tanners, curriers, & shoemakers; & his sheep gave wool & his fields produced cotton & flax for the weavers & spinners, & his own orchards fruit for the distillers. His carpenters & sawyers built & kept in repair all the dwelling-houses, barns, stables, ploughs, harrows, gates, eta, on the plantations, & the outhouses of the house. His coopers made the hogsheads the tobacco was prized in, & the tight casks to hold the cider & other liquors. The tanners & curriers, with the proper vats, etc., tanned & dressed the skins as well for upper as for lower leather to the full amount of the consumption of the estate, & the shoemakers made them into shoes for the negroes. A professed shoemaker was hired for three or four months in the year to come & make up the shoes for the white part of the family. The blacksmiths did all the iron work required by the establishment, as making & repairing ploughs, harrows, teeth, chains, bolts, etc. The spinners, weavers, & knitters made all the coarse cloths & stockings used by the negroes, & some of fine texture worn by the white family, nearly all worn by the children of it. The distiller made every fall a good deal of apple, peach, & persimmon brandy. The art of distilling from grain was not then among us, & but few public distilleries. All these operations were carried on at the home house, & their results distributed as occasion required to the different plantations. Moreover, all the beeves & hogs for consumption or sale were driven up & slaughtered there at the proper seasons, & whatever was to be preserved was salted & packed away for distribution."

Nevertheless the plantation drew upon the outside world for many articles, especially luxuries, & the owner had to find the wherewithal to make payment. The almost universal answer to this problem was tobacco. They had no gold or silver mines from which to draw bullion that could be coined into cash; the fur trade was of little importance compared with that farther north; the Europe of that day raised sufficient meat & grain for its own use, & besides these articles were bulky & costly to transport. But Europe did have a strong craving for the weed &, almost of necessity, Virginians set themselves to satisfying it. It is estimated that prior to the Revolution, Virginia often sent out annually as much as 96,000 hogsheads of tobacco. Tobacco took the place of money, & debts, taxes & even ministers' salaries were paid in it.

The tobacco industry was not only ruinous to the Chesapeake soil, but it was badly organized from a financial standpoint. Three courses were open to the planter who had tobacco. He might sell it to some local mercantile house, but these were not numerous nor as a rule conveniently situated to the general run of planters. He might deposit it in a tobacco warehouse, receiving in return a receipt, which he could sell if he saw fit & could find a purchaser. Or he could send his tobacco direct to an English agent to be sold.

If a great planter was situated upon navigable water, this last was the course he was apt to follow. He would have his own wharf to which once or twice a year a ship would come bringing the supplies he had ordered months before & taking away the great staple. If brought from a distance, the tobacco was rarely hauled to the wharf in wagons—the roads were too wretched for that—instead it was packed in a great cylindrical hogshead through which an iron or wooden axle was put. Horses or oxen were then hitched to the axle & the hogshead was rolled to its destination. By the ship that took away his tobacco the planter sent to the English factor a list of the goods he would require for the next year. It was an unsatisfactory way of doing business, for time & distance conspired to put the planter at the factor's mercy. The planter was not only unlikely to obtain a fair price for his product, but he had to pay excessive prices for poor goods & besides could never be certain that his order would be properly filled.

Washington's experiences with his English agents were probably fairly typical. Near the close of 1759 he complained that Thomas Knox of Bristol had failed to send him various things ordered, such as half a dozen scythes & stones, curry combs & brushes, weeding & grubbing hoes, & axes, & that now he must buy them in America at exorbitant prices. In September of the same year he ordered, among other things, busts of Alexander the Great, Julius Caesar, Charles XII of Sweden, Frederick the Great, Prince Eugene & the Duke of Marlborough; also of two wild beasts. The order was "filled" by sending him a group showing AEneas bearing his father from Troy, two groups with two statues of Bacchus & Flora, two ornamental vases & two "Lyons."

Most Virginia planters got in debt to their agents, & the Washingtons were no exception. When their agents, Robert Cary & Company, called his attention to the fact, George wrote them, that they seemed in a bit of a hurry considering the extent of past dealings with each other. "Mischance rather than Misconduct hath been the cause of it," he asserted, explaining that he had made large purchases of land, that crops had been poor for 3 seasons & prices bad. He preferred to let the debt stand, but if the agents insisted upon payment now he would find means to discharge the obligation.

The 18C Virginia life had its color & charm. It is true that a few planters had their gorgeous coaches, yet Martha Washington remembered when there was only one coach in the whole of Virginia, & throughout her life the roads were so wretched that those who traveled over them in vehicles ran in imminent danger of being overturned, with possible dislocation of limbs & disjointing of necks. Virginians & Marylanders had their liveried servants, mahogany furniture, silver plate, silks & satins; along with their Madeira & port wine. But many plantation account books show that the planter was chronically in debt & that bankruptcy was common, while accounts left by travelers reveal the fact that many of the mansion houses were shabby & run down, with rotting roofs, ramshackle doors, broken windows into which old hats or other garments had been thrust to keep the wind away...

See a detailed biography of Martha Washington, where much of this information came from, Here.