Martha Washington - Not thrilled to be First Lady 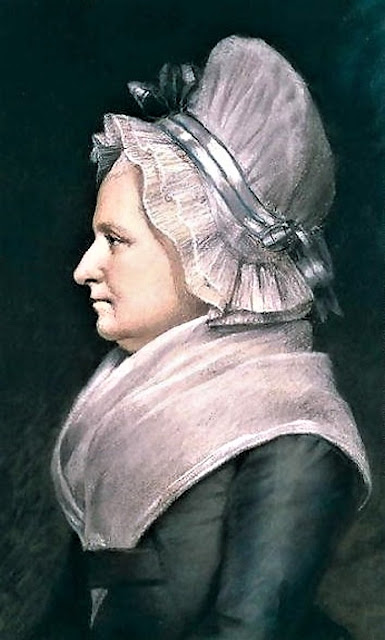 The White House Historical Association tells us that Martha Washington said, "I think I am more like a state prisoner than anything else, there is certain bounds set for me which I must not depart from..." So did Martha Washington confide that she did not entirely enjoy her role as first of first ladies. She said that though "many younger and gayer women would be extremely pleased," she would "much rather be at home."

But when George Washington assumed the new duties of president of the United States on April 30, 1789, his wife brought to their position a tact and discretion developed over 58 years of life in Tidewater Virginia society. Martha Dandridge was born June 2, 1731, on a plantation near Williamsburg. Typical for a girl in an 18th-century family, her education was negligible except in domestic and social skills, but she learned the arts of a well-ordered household. At age 18, she married the wealthy Daniel Parke Custis. Two babies died, and two others were barely past infancy when Daniel Custis died in 1757.

From the day Martha married George Washington in 1759, her great concern was the comfort and happiness of her new husband and her surviving children. She and George had no children of their own. Her love of private life equaled her husband's, but when his career led him to the battlegrounds of the Revolutionary War and finally to the presidency, she followed him bravely.

At the President's House in the temporary capitals of first New York then Philadelphia, Martha's warm hospitality made her guests feel at ease. She took little satisfaction in "formal compliments and empty ceremonies," and declared that "I am fond only of what comes from the heart." Abigail Adams, who sat at her right during parties and receptions, praised her as "one of those unassuming characters which create Love & Esteem."

In 1797, the Washingtons said farewell to public life and returned to their beloved Mount Vernon to live surrounded by kinfolk, friends, and a constant stream of guests eager to pay their respects to the celebrated couple. Her husband died the following year.
Posted by Barbara Wells Sarudy at 4:00 AM